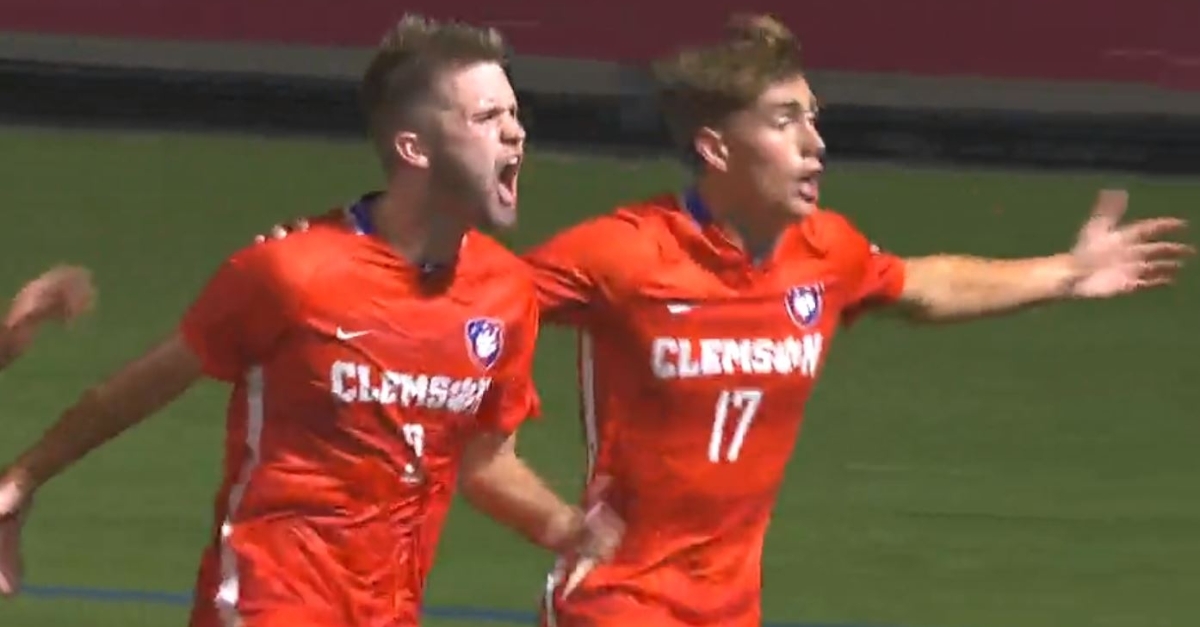 Clemson celebrating after their second goal

NEWTON, Mass. – The top-ranked Clemson men’s soccer team traveled to Boston College (2-2-1) and picked up a 2-1 win in its first ACC match of the season on Saturday night. The Tigers capitalized on their chances and with the help of a BC red card were able to bring home the win and advance to 5-0-0 on the season.

The first half was competitive with each team trading scoring opportunities, but none that were clear cut and provided challenges for the goalkeepers. In the 34th minute, Tim Strobeck pressured the Boston College keeper, who stumbled trying to clear the ball away and the Swedish sophomore capitalized on the mistake to put the Tigers up 1-0.

The second half was going by without much offensive action, until a counter-attack led by Brandon Parrish forced a dangerous tackle from behind that yielded a red card to BC’s CJ Williams. The Tigers didn’t take long to capitalize on the man advantage, as just five minutes later Ousmane Sylla hit a cross that found Adam Lundegard, who knocked the ball home for his first career goal and put his team up 2-0.

Clemson did concede a goal to the Eagles in the 70th minute, ending its streak of consecutive minutes without allowing a goal at 387. However, despite a resilient BC attack looking for the equalizer, the Tigers’ defense was able to rebound and held the man-down Eagles at bay for the remainder of the match to secure the win.

“I’m proud of the guys,” said Head Coach Mike Noonan on the win. “[Boston College] is a very, very difficult place to play. BC was set up to make it hard and they certainly did. There’s a great spirit in their team but I’m happy we had the energy and the ability to be able to hold the lead.”

Up next, the Tigers travel to the University of Alabama at Birmingham on Tuesday, September 13 to face off with the Blazers. Kickoff is set for 8 p.m. EDT and the match will stream on ESPN+.

Tim Strobeck in the right place at the right time to put us up here in the first half!#ClemsonUnited🧡💜
📺https://t.co/ZIeOhBvU5L
📊https://t.co/dPJLfTgfjc pic.twitter.com/o8GPwPbuzF