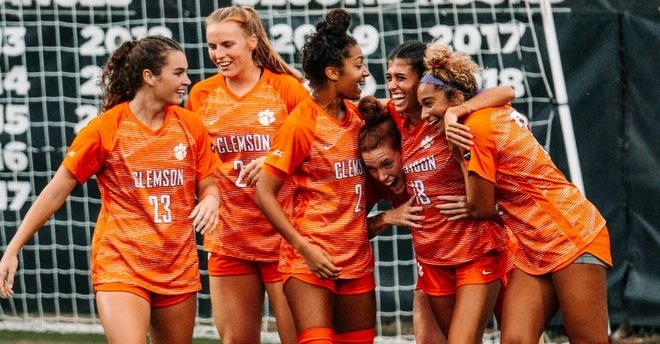 COLUMBIA, S.C. - The Clemson women’s soccer team battled its rival No. 4 South Carolina to a 2-2 draw on Thursday night. The result extends Clemson’s unbeaten streak against the Gamecocks to four matches.

The draw moves the Tigers to 16-11-2 all-time against the Gamecocks, with South Carolina’s last win back in 2018. In its first four games, South Carolina had held each of its opponents scoreless, but the Tigers managed two goals on their rivals.

The Tigers jumped on the Gamecocks early, as Maria Manousos forced a turnover inside the penalty area and calmly put the ball away for her first career goal in just the third minute. Clemson continued to control the game over the rest of the half putting seven more shots on goal, but the South Carolina keeper was up to the task.

Late in the first frame, a Halle Mackiewicz save resulted in a loose ball that found the foot of Megan Spiehs, who lifted the ball over Mackiewicz to level the score at 1-1.

In the 65th minute, the Tigers put together a beautiful build up resulting in a blocked Hal Hershfelt shot that rolled perfectly to Sydney Minarik, who rocketed it into the back of the net to put Clemson up 2-1.

The Tigers’ defense was strong following the goal, but Catherine Barry found the back of the net in the 81st minute to equalize. Each team traded chances in the final minutes, but neither could break through, and the match ended at two apiece.

Clemson outshot South Carolina 18-10 and had three corners to the Gamecocks’ one, but ultimately the result moved Clemson to 2-1-2 on the year while South Carolina leaves the rivalry match 3-0-2.

“It was good to see the way we showed up tonight,” said Head Coach Eddie Radwanski. “The kids played phenomenal football at times. I’m proud of their effort and their commitment… It was a great game, it’s a great rivalry and I think each team makes each other better.”

The Tigers return to Historic Riggs Field to host Appalachian State on Sunday, Sept. 4 at 2 p.m. Admission to the match is free.

SYD GIVES THE TIGERS THE LEAD WITH A BEAUTIFUL FINISH! 💪