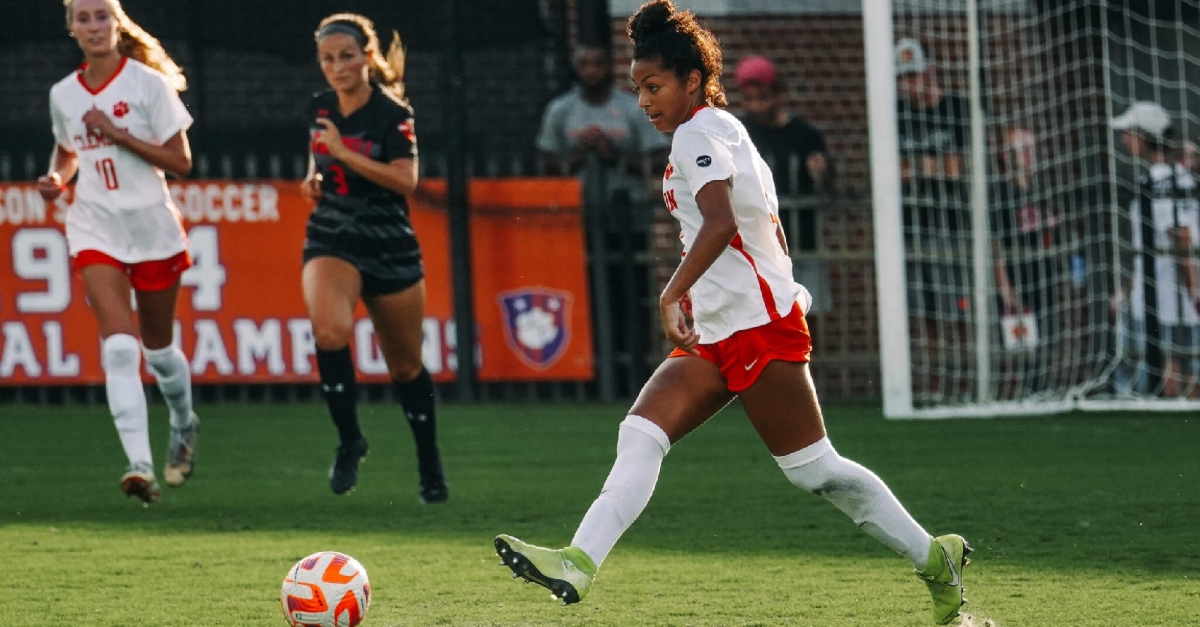 CLEMSON, S.C. – The No. 25 Clemson women’s soccer team earned its first victory of the season with a 5-1 win over defending Big South Regular Season Champions, Campbell behind a brace and an incredible performance from Renee Lyles.

Campbell got off to a great start, getting on the board early in the second minute of the game. Less than a minute later, sophomore Lyles found the equalizer, tying the game at 1-1. Lyles continued to impress as she got the offensive edge yet again, striking the ball off of the crossbar and into the back of the net, giving the Tigers the 2-1 lead at the half, despite many other offensive opportunities.

The Tigers (1-0-1) dominated the second half in both possession and chances. Freshman midfielder Emily Brough made her presence felt in her first-ever appearance, scoring the third goal for the Tigers.

Clemson continued to maintain control of the match and added two more goals for good measure, the first on a highlight-reel worthy touch by Caroline Conti off a Lyles cross that beat the Camels’ keeper. In the final minute of the match, Minarik scored her first goal of the season on a right-footed blast into the left side panel.

“It was a good win tonight,” said head coach Eddie Radwanski. “We knew we would get a good fight from Campbell. We had a great response to come back and get a goal. In the second half, our quality went up, and we were able to score some more goals.”

Clemson hits the road to take on Western Carolina in Cullowhee, N.C. on Thursday night at 7 p.m. The Tigers return to Historic Riggs Field to host Appalachian State on Sunday, Sept. 4 at 2 p.m. Admission to the match is free.

RENEE LYLES WITH THE EQUALIZER!!

What a goal from the sophomore! 🤩👀 pic.twitter.com/SgAfEpF37D

SHE DOES IT AGAIN!!

Renee Lyles gets the brace in only the second game of the season!! 🤯🤯 Tigers lead, 2-1! pic.twitter.com/NSaJGF9NvJ

Are you kidding me!? Clemson leads 4-1 here with 17 minutes to go! pic.twitter.com/pSu9KrwIcd

SYD GETS IN ON THE FUN!!