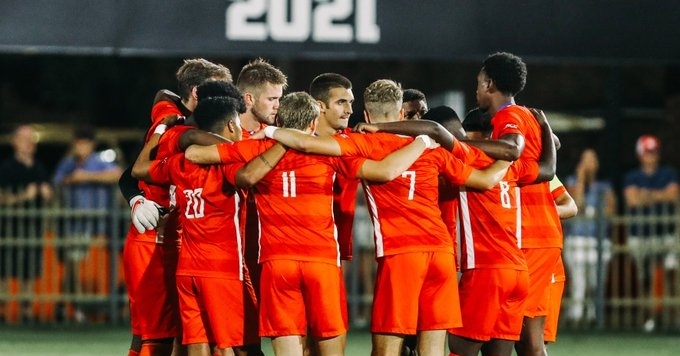 CLEMSON, S.C. – The No. 1 Clemson men’s soccer team suffered its first loss of the season on Friday night against No. 16 Syracuse (6-0-1, 2-0 ACC) by a final score of 2-1. After scoring the game’s first goal, the Tigers (6-1-0, 1-1 ACC), playing without starters Ousmane Sylla, Derek Waleffe, and Hamady Diop conceded twice and were unable to bounce back.

The Tigers opened up the scoring in the eighth minute when Shawn Smart made a beautiful overlapping run and received the ball on the right-hand side of the attacking third. He played a perfectly weighted cross to the right foot of Isaiah Reid who one-timed it into the top of the net for his third goal this season.

In the 15th minute, a defensive miscue in front of Clemson’s net led to a Syracuse equalizer. The two top-20 teams traded opportunities for the remainder of the half, but neither squad was able to break through.

As the second half began, Syracuse earned a one-on-one with the keeper just three minutes in and capitalized on the opportunity, putting the Tigers behind for the first time since the season opener against Indiana.

While Clemson was able to create a few chances late, the Syracuse keeper was repeatedly up to the task. Despite putting seven shots on goal to the Orange’s six, Clemson could not manage to level the game and suffered its first home loss under Mike Noonan when scoring the game’s first goal.

“They fought to the last whistle,” said Noonan of his team’s effort. “Unfortunately, we made some mistakes and it cost us tonight. This is a really tough and resilient team and I’m very proud of them.”

Up next, Clemson hosts Presbyterian College on Monday, Sept. 19 at Historic Riggs Field. Kickoff is set for 7 p.m. with the match slated to stream on ACCNX.

The beautiful overlapping run by Shawn Smart and the clinical finish from Isaiah 💪 The senior from Rock Hill, South Carolina LOVES to light the lamp early 😉🚨#ClemsonUnited🧡💜
📺https://t.co/Rt60qedEZN
📊https://t.co/uZts9TDbDT pic.twitter.com/fxFXVQuHw9

Trevor keeps us in this one with a FANTASTIC diving save. The score remains 2-1 Syracuse late. pic.twitter.com/yAvO2IslKF