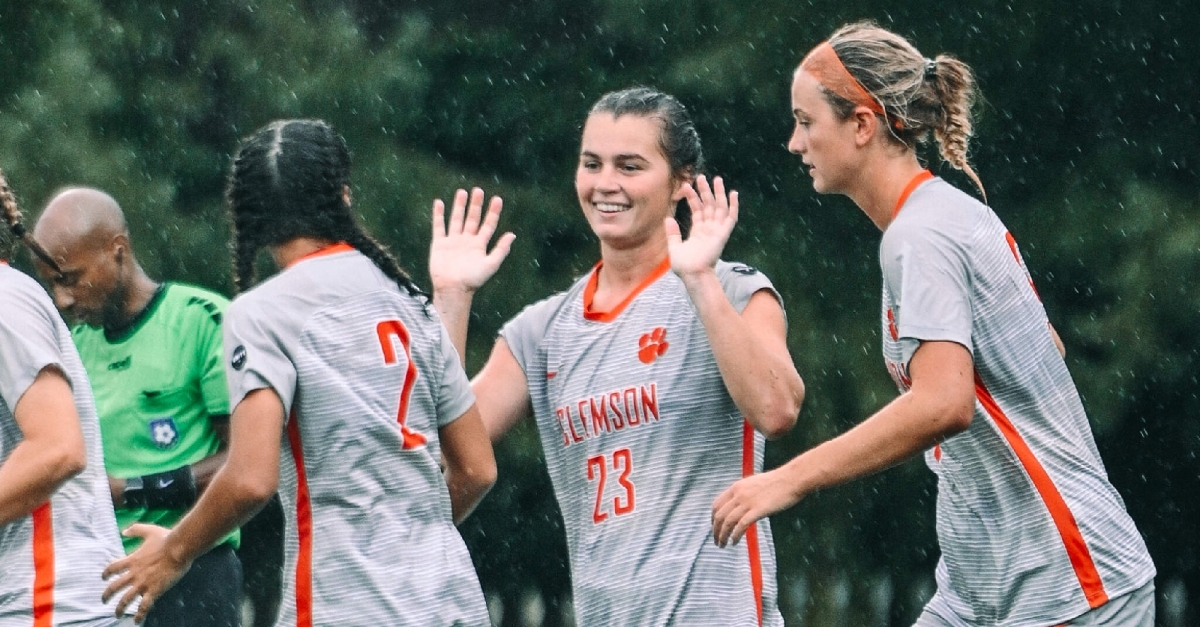 Caroline Conti scored her third goal of the season to start things off for the Tigers in the 3-0 win (Clemson athletics photo).

CLEMSON, S.C. - The Clemson women’s soccer team dominated in a rainy Sunday evening match after a near three hour weather delay against the App State Mountaineers for a 3-0 win at Historic Riggs Field.

“I give all the credit to the team for keeping a good focus and concentration. It’s not easy when you have multiple weather delays, so I was really impressed with how we came out and dialed in,” said Head Coach Eddie Radwanski. “I’d like to thank all the fans that stayed here for several hours waiting to see when the kickoff was going to take place. It was good to get three goals and get a shutout. [We had] a lot of good possessions, creating opportunities. We showed a lot of good patience and got to play a lot of players which was great, and everyone who stepped on the field did a fantastic job.”

The Tigers controlled the ball nicely in the first 20 minutes of the first half but couldn’t break through the App State defense until senior forward Conti put the ball in the back of the net off a corner kick and ricochet off the Mountaineer keeper in the 32nd minute. The Tigers registered 16 shots in the first half with nine being on goal while holding App State to no shots.

Clemson came out of the locker room with great momentum as freshman Manousos scored again for the Tigers in the 49th minute, marking her second straight game that she has registered a goal. The Tigers kept knocking on the door until Manousos dished a beautiful ball to Minarik, who headed it into the top right corner of the net in the 63rd minute to give the Tigers a 3-0 lead, solidifying the win. This also marks Minarik's second straight game with a goal.

Clemson registered 32 shots in the match, the most since Aug. 19, 2021 against Saint Francis while holding App State to two. Mackenzie Duff, Ella Hauser and Cassidy Lindley all earned their first career start in the orange and regalia.

THIRD GOAL OF THE SEASON FOR CAROLINE CONTI‼️

MARIA MANOUSOS IS ON FIRE 🔥🔥🔥

This marks the second straight game that the freshman has scored! 🤯

That Maria to Sydney connection 🤩🤩

Syd grabs her third goal of the season off a beautiful assist from Maria! 👏