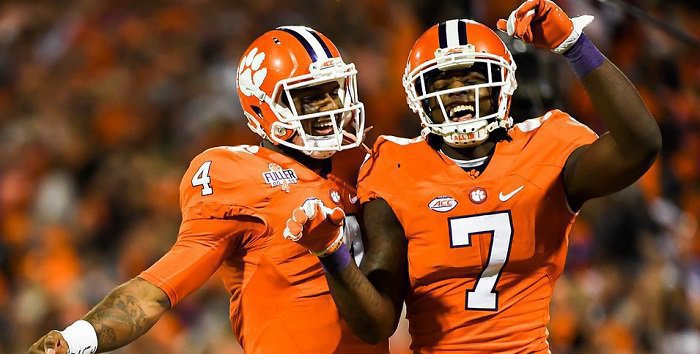 Clemson has had at least one first-round selection for five consecutive years.

Clemson, S.C.— Mike Williams and Deshaun Watson were both selected within the first 12 picks of the 2017 NFL draft in Philadelphia on Thursday evening. Williams was the seventh selection of the draft by the Los Angeles Chargers and Watson was the 12th choice by the Houston Texans.

Williams’s selection is the seventh highest draft pick in Clemson history and the 10th top 10 selection. It is the highest selection by a Clemson player since Sammy Watkins was the No. 4 selection by Buffalo in 2014. Williams is the third Clemson wide receiver to be selected in the first round in the last five years. Clemson is the only school that can make that claim.

Williams, an All-American in 2016 who came back from a neck injury in 2015, had 98 receptions for 1361 yards and 11 scores this past season. He had eight catches for 94 yards and a touchdown in the National Championship clinching win over Alabama.

Watson is the first Clemson quarterback to be selected in the first round since 1979 when Steve Fuller was the No. 23 selection of the Kansas City Chiefs. Watson wore No 4 the last three years with special permission from Fuller after it was retired in his honor at the end of his career. 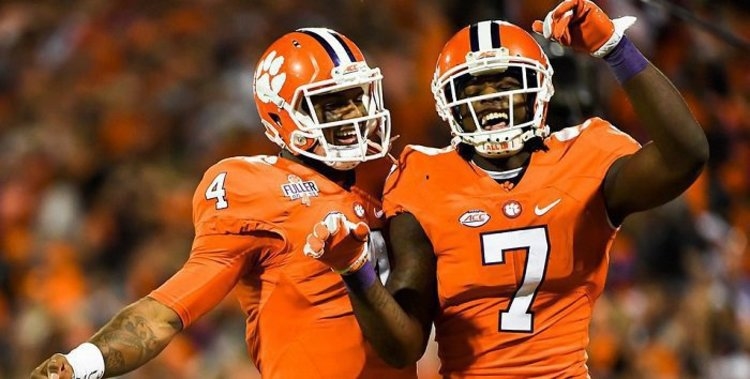 Clemson has had at least one first-round selection for five consecutive years. "

Watson’s No. 12 selection is the highest for a Clemson quarterback since Bobby Gage was the No 6 selection of the 1949 draft.

Watson is the second Clemson player taken in the first round by the Texans in the last five years. He is expected to team with former Tiger wide receiver DeAndre Hopkins, the Texans top choice in the 2013 draft. Former Tiger D.J. Reader is also on the Houston Texans roster.

Watson established 55 records at Clemson over the last three years when he led Clemson to a 32-3 record, including the National Championship victory over Alabama this past January. In 2016, he threw for a Clemson record 4,593 yards and 41 touchdowns. He had had 5219 yards of total offense and 50 touchdowns rushing and passing.

Clemson now has had at least one first-round selection for five consecutive years. The only other schools to have a five-year streak are Alabama, Florida and Texas A&M.