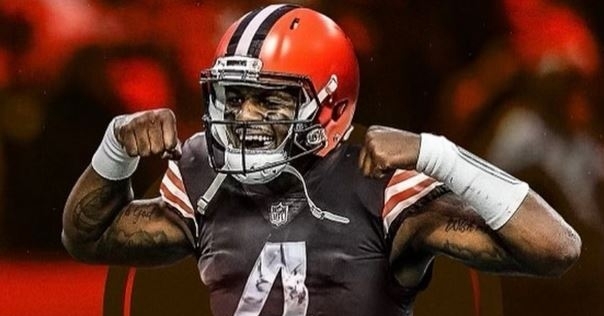 Deshaun Watson could see his first game action with the Browns on Friday if the NFL allows it.

Watson has not played in any game since the end of the 2020 NFL season after entering a trade dispute with the Houston Texans last year and then having a slew of civil cases and a pair of criminal grand jury proceedings in the same timeframe of the 2021 campaign.

Watson has a six-game NFL suspension under appeal currently for the allegations of sexual assault and misconduct, where he has settled 23 of 24 civil cases and not been indicted criminally.

NFL commissioner Roger Goodell is pushing for a season-long suspension and it's unknown if the league will step in before Friday or a new decision will be handed down on the case by then.

"We decided it was the right thing to do," Goodell said this week of the appeal. "Because we’ve seen the evidence. She (Judge Sue Robinson) was very clear about the evidence. She reinforced the evidence, that there was multiple violations here and they were egregious, and that it was predatory behavior.

"Those were always things we felt was really important for us to address and in a way that’s responsible.”

If Watson is allowed to play in the 7 p.m. contest Friday, he will take on fellow former Clemson quarterback Trevor Lawrence, who was announced as a starter for his first preseason game of the year.

The #Browns say QB Deshaun Watson is scheduled to start in the preseason opener vs. the #Jaguars on Friday (provided there is no change to his status).

As the source said:

“Indefinite suspensions of at least a year have prohibited players from participating in any team activities during the preseason or regular season. That’s been the case for policy violations related to drugs or betting.” So…

While there isn’t a hard-line rule in the personal conduct policy about preseason games for players suspended for the year, past precedent would suggest it would throw Friday into flux. Quite the 48 hours ahead, if the league does make a ruling before Friday.