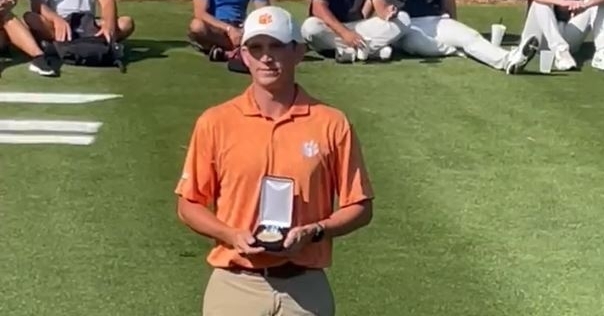 CLEMSON, S.C. — Jacob Bridgeman (Inman, S.C./Chapman) has been named the ACC Golfer of the Year. The announcement was made Wednesday by the Atlantic Coast Conference.

Bridgeman has had a remarkable season with a 70.37 stroke average, 14 rounds in the 60s, 18 rounds under-par and six top 10 finishes in nine events. He has finished in the top four in each of his last five tournaments, the longest such streak by a Clemson golfer since D.J Trahan had six-straight top four finishes in 2001-02, the year he was also named ACC Golfer of the Year.

Included in the streak have been two wins for Bridgeman. He won the Linger Longer Invitational in March at Great Waters Course in Eatonton, Ga., then won the ACC Tournament at Shark’s Tooth in Panama City, Fla. in April. He won the Linger Longer by a six-shot margin, tied for the largest margin of victory in Clemson history, then won the ACC Tournament in a playoff that lasted two holes against defending champion Peter Fountain of North Carolina.

Entering the NCAA Regional Tournament, Bridgeman is ranked second nationally in the PGA University Rankings. The top five in that ranking at the end of the NCAA Tournament will receive status on the Korn Ferry Tour this summer. Bridgeman is currently ranked ninth in the latest Golfweek rankings and is 14th by Golfstat. He is the highest rated ACC player in both computer rankings.

Bridgeman was also named to the All-ACC team for the third time in his career. The only year he was not on the All-ACC team in his four years at Clemson was 2020 when no team was chosen due to the COVID-19 cancelled season. Last year he was named the ACC Golf Student-Athlete of the Year for his performance on the course and in the classroom.

The native of Inman, S.C. is ranked second in Clemson history in career stroke average at 70.73 and is first in rounds in the 60s with 49. He has five individual victories, tied for the Clemson career record with Trahan and Chris Patton.