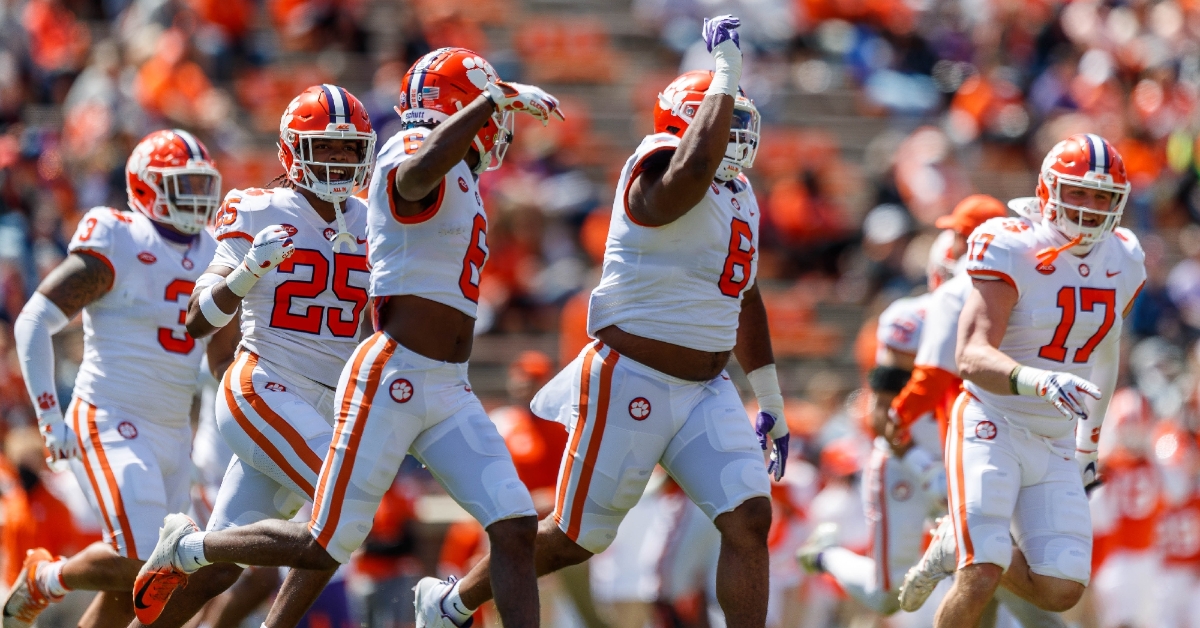 The contest provided the public its first look at Clemson’s 2021 squad, which completed its 15-session spring practice schedule as the Tigers prepare to seek a seventh consecutive ACC Championship this year. Seven more signees from Clemson’s 2021 recruiting class will arrive to join the team this summer in advance of fall camp in August.

The Orange team added to its lead in the final minute of the first half when placekicker B.T. Potter converted on a 54-yard field goal. The kick exceeded his official career long of 52 yards and gave the Orange squad a 10-0 lead at the break.

Potter added another field goal early in the third quarter to push the score to 13-0. The White team responded with its first points of the day early in the fourth quarter when quarterback Taisun Phommachanh connected with wide receiver Ajou Ajou on a 16-yard scoring pass.

The White team took its first lead with 1:58 remaining in the game, as running back Phil Mafah’s four-yard touchdown run capped an 11-play, 70-yard game-winning drive. The White team defense forced a turnover on downs on the ensuing drive to seal the victory.

Collectively, the two defenses combined to produce three takeaways on the day. Cornerback Sheridan Jones, who had a pick-six in his Spring Game debut two years ago, recorded the game’s first takeaway, recovering a fumbled lateral. Safety R.J. Mickens (Orange) and linebacker Sergio Allen (White) each added an interception for their respective teams.

The units also combined for 11 sacks, including six by the White team and five by the Orange team. Safety Tyler Venables led the White squad with 3.5 sacks, while defensive tackle Ruke Orhorhoro paced the Orange squad with two sacks.

Clemson will open the 2021 season with one of the most-anticipated non-conference showdowns of the season when it faces Georgia on Saturday, Sept. 4 in Charlotte. Clemson will return to Death Valley for its home opener a week later when it hosts South Carolina State at Memorial Stadium on Saturday, Sept. 11.

Prior to the contest, Clemson honored its team award-winners from the 2020 season. A full list of those award-winners is included below. Departed seniors from Clemson’s 2020 squad in attendance also received their 2020 ACC Championship rings at that time.

His career-long in regular season is 52 yards. pic.twitter.com/Fw8UZkFfa2

Phil Mafah punches it in and White takes the lead! pic.twitter.com/FaJjtRfBBS

White Team gets on the board with a beautiful throw-and-catch from Taisun Phommachanh to Ajou Ajou! pic.twitter.com/0omCfbR85z