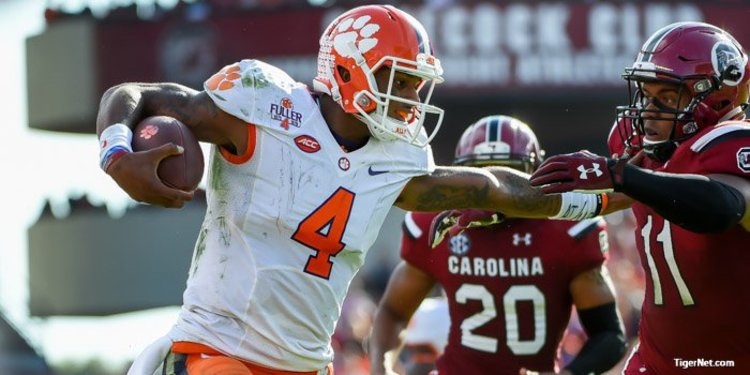 "Oh yeah, and what happened when Watson played against the feared Tide," CBSSports.com said." "He carved up the best defense in the country for 405 yards and four touchdowns and fell just one score short in a shootout that was arguably won by Alabama's efforts on special teams. Watson was the best quarterback in college football a year ago, there's no reason to think that's changing. In fact, he might be the best prospect available when the 2017 NFL Draft rolls around in a year."

Workhorse running back Wayne Gallman was listed at #35 overall.

"The oft-overlooked Gallman has been a core part of Clemson's offensive success since he took over the top spot in the backfield during the second half of 2014, CBSSports.com said. "Gallman took that momentum into 2015 and set the school's single-season rushing record with 1,527 yards, providing the perfect complement to Deshaun Watson in the backfield. Gallman's 283 carries in 2015 are a tribute to his workman-like mentality and durability, but Clemson is healthier and a little bit deeper at the running back position heading into the season, meaning he can tote it less and stay fresher ... which is dangerous."

"He anchored an offensive line that allowed just 18 sacks all season and helped pave the way for a rushing attack that amassed over 3,300 yards on the ground, garnering consensus Freshman All-American honors and earning a spot on the All-ACC third team," CBSSports.com said.

Receiver Mike Wiliams was on the list at #42 overall.

"Williams led the Tigers in receiving during his sophomore season, recording 57 receptions for 1,030 and six touchdowns," CBSSSports.com said. "He was primed for an even bigger year but suffered a scary neck fracture after being pushed into a goalpost trying to secure a pass in the end zone in Clemson's opener. Williams, thankfully, is back for the Tigers in 2016, and his return makes this offseason that much better."