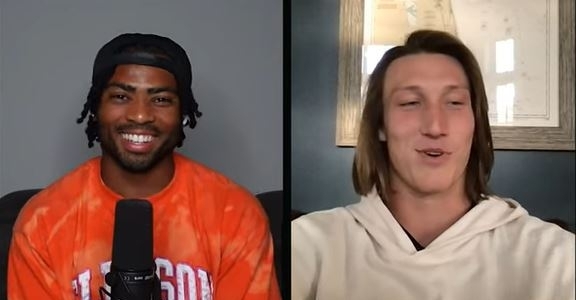 Trevor Lawrence went on former teammate Darien Rencher's podcast this week to relive some favorite Clemson memories and break down his first year in the NFL.

Lawrence wrapped up that season on Sunday with a surprise 26-11 win over the Indianapolis Colts to finish 3-14.

After a No. 1 overall NFL draft selection last April, Lawrence passed for 3,641 yards with 12 touchdowns to 17 interceptions as a rookie.

"It's tough mentally for sure because you put everything into every week...There is something about knowing how to win," Lawrence said of handling a losing year like the Jaguars endured. "Good teams know how to win when it's a close game -- they figure out a way to pull it out and finish and win the game. We definitely didn't have that this year because we had a lot of tight games that we could've won and didn't end up finishing. So that's something that moving forward that we've got to learn how to do. I've got a lot of confidence that we're going to do that."