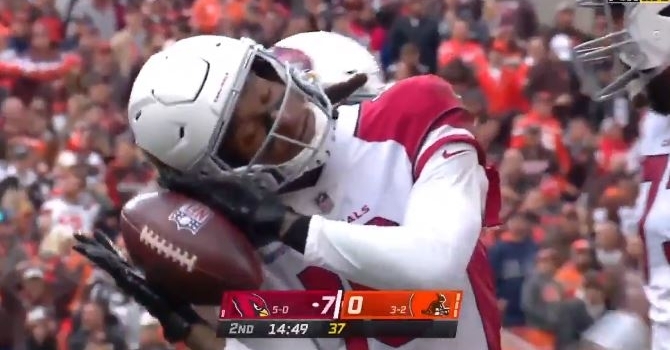 Nuk Hopkins celebrates after one of his touchdowns

Arizona Cardinals standout receiver DeAndre Hopkins had two touchdowns in his team's 37-14 blowout victory over the Cleveland Browns on Sunday.

Hopkins only had four targets in the game, which accounted for only 14.3 percent of the pass attempts by quarterback Kyler Murray.

However, two of the passes thrown to him went for touchdowns, including one where he juked multiple defenders making them look silly before reaching the endzone.

Nuk's six touchdowns on the season, which ties him for second-most in the NFL, already matches his 2020 total.

The Cardinals are 6-0 on the season, and one of the main reasons is the sensational offensive combo of Murray and Hopkins.

Check out highlights below:

DeAndre Hopkins with the moves ??

Another day, another easy TD for @DeAndreHopkins. #RedSea