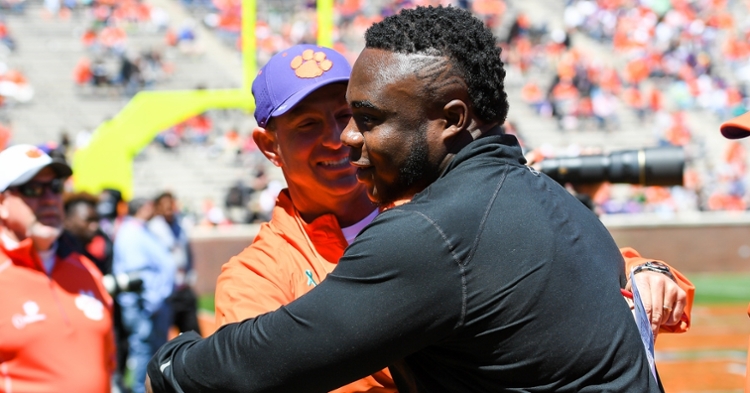 Grady Jarrett has been a star on the Falcons defense.

Pro Football Focus named its top-50 players in the NFL right now and two former Tigers made the list, with one notable absence.

DeAndre Hopkins tops the Tigers at No. 17 going into another campaign with the Arizona Cardinals, ranking second only at his position to Green Bay's Davante Adams.

"New team. New quarterback. Same old dominant performances from DeAndre Hopkins," PFF's Sam Monson said. "His signature play was a phenomenal catch on a Hail Mary where he outjumped multiple defenders to come down with an improbable touchdown, but Hopkins was also the second-leading receiver in the league in terms of yardage and generated 2.25 yards per route run despite a very predictable alignment pattern and an average depth of target of just 9.0 yards."

"Very few players have done more with less help than Falcons interior lineman Grady Jarrett. It’s not that Atlanta hasn’t tried to find him some complementary pieces along the defensive line; they just haven’t had much success when they have. Jarrett continues to dominate despite this," PFF analyzed.

Houston's Deshaun Watson was 43rd on the list last preseason but did not make the top-50 cut. The projection is likely due to his 2021 season still being in limbo due to sexual assault and inappropriate behavior allegations in a lawsuit, as Watson is coming off of his best PFF season grade (92.5) and a sixth-best ranking in the NFL last year. The QBs to make the preseason list include Patrick Mahomes (2), Tom Brady (7), Aaron Rodgers (10), Russell Wilson (22), Josh Allen (40) and Dak Prescott (50).