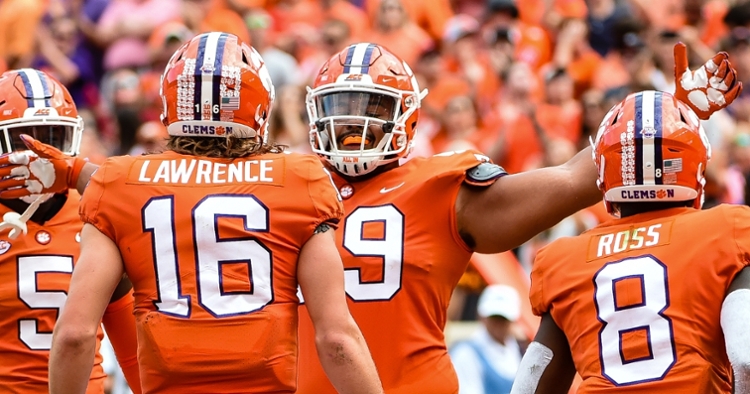 Carman was picked in the second round

Clemson offensive lineman Jackson Carman was selected by the Cincinnati Bengals with the 46th overall pick in the 2021 NFL Draft on Friday night.

Social media was excited for Carman who was drafted by his favorite NFL team which happens to be his hometown team too.

Clemson has had three top 50 picks in the last three drafts.

Check out some of the reaction on Twitter on the Bengals picking Carman:

With the 46th pick in the 2021 NFL Draft, the Bengals select OT Jackson Carman, Clemson#NFLDraft2021 pic.twitter.com/E1bYvhFRYe

Jackson Carman taken with 46th pick of the draft by Cincy. He is second highest drafted Clemson offensive lineman in history.
Dave Thompson, an offensive guard, was 30th pick of Lions in 1971 draft.

The #Bengals get some protection for QB Joe Burrow, taking #Clemson OT Jackson Carmen at No. 47. He’s coming off disc surgery, so some risk. But they feel comfortable.

The #Bengals have now gotten some more help for Joe Burrow on the OL.

In Round 2, Cincinnati goes with Clemson OT and Ohio native Jackson Carman.

The Bengals bring in some new protection for Joe Burrow, taking Clemson OT Jackson Carman with pick No. 47. #NFLDraft pic.twitter.com/xCArLP9dgF

Congratulations to @JacksonCarman1 for being drafted by the @Bengals! Best of luck to you in the NFL. #ClemsonNFL #NFLDraft pic.twitter.com/viUNRl1bJT

When you're an Ohio native and get drafted by the @Bengals ??@Jackthejiant pic.twitter.com/DpUoDrlCdK

Jackson Carman was a big time recruit but fairly underwhelming at Clemson. Probably needed to stay another year.

The Bengals needed someone who can step in Day 1 and protect Burrow, not a project.

Here's a taste of what you're getting with @Jackthejiant ?? pic.twitter.com/zj6nVh7168

Don’t worry about it. Won’t be a conflict for you, @Jackthejiant https://t.co/DNdNZIYx69

An incredible moment when @Jackthejiant found out he’ll be playing for his hometown team! pic.twitter.com/PSNYWo2CtX

Jackson Carman is returning to the Queen City. Welcome back home! pic.twitter.com/JWQ3tOvKR5

The Bengals bring in some new protection for Joe Burrow, taking Clemson OT Jackson Carman with pick No. 47. #NFLDraft pic.twitter.com/xCArLP9dgF

Jackson Carman said he played the last five games at Clemson with a herniated disk. Said he had surgery to repair it and feels good with the recovery.

. @arodgers_3 reacts to his teammate, Jackson Carman going off the board! ???? pic.twitter.com/PvT9FxrnCA