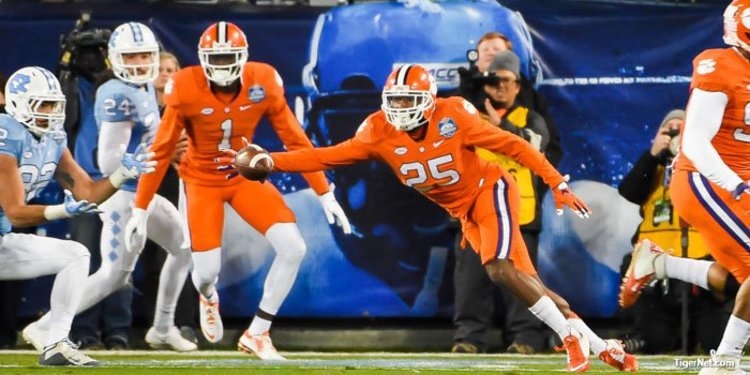 Former Clemson cornerback Cordrea Tankersley was selected in the third round (#97 Overall) of the 2017 NFL draft by the Miami Dolphins.

Tankersley amassed 149 tackles, nine interceptions, and 22 pass breakups in 1,906 snaps over 55 games (30 starts) in his career and appeared in the second-most games in Clemson history behind only Chad Diehl (57).

So proud of Cordrea Tankersly, another @ClemsonFB player who will do great things in the @NFL #NFLDraft @MiamiDolphins pic.twitter.com/ceqnabybXX

About time! Congrats to my bro Cordrea! I know you gonna make all those who slept wake up! #Clemson #Lockdown #GetATwitter pic.twitter.com/Kn9tVvflEx

Congrats to my dawg Cordrea Tankersley on being drafted to the Miami Dolphins ?? #NoFlyZone

CB Cordrea Tankersley allowed a passer rating of only 41.2 in two full seasons.
QB rating of all incompletions: 39.6 https://t.co/SxX1Y8HpsQ

Cordrea Tankersley is a good, physical corner. Don't want him playing off too much right now but he'll challenge for playing time right away

The Dolphins take CB Cordrea Tankersley in round 3.

From special teams as a freshman to All-American cornerback as a senior...

Several mock drafts had Cordrea Tankersley projected as a possible 2nd-round pick so #Dolphins getting him late in 3rd is not a reach.