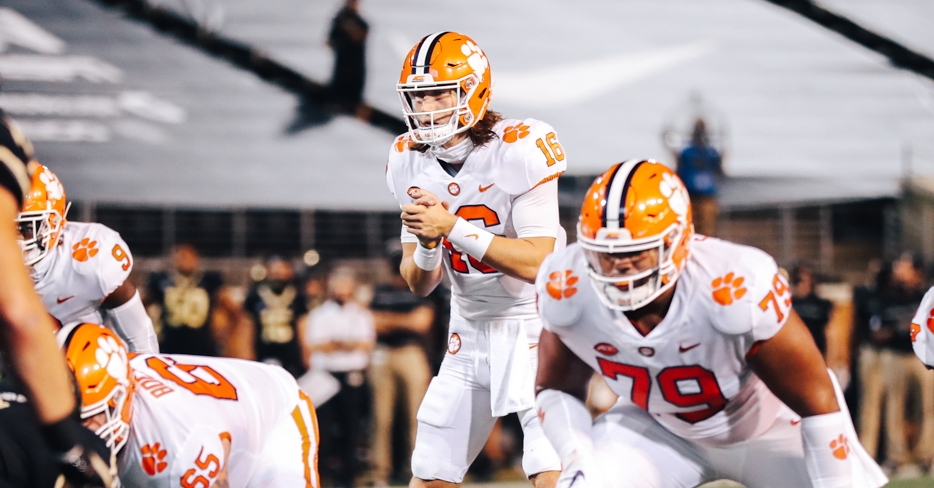 CLEMSON, S.C. — The Atlantic Coast Conference announced today that quarterback Trevor Lawrence has been named ACC Quarterback of the Week for his performance in Clemson’s 37-13 win against Wake Forest on Saturday.

Lawrence’s selection represents his first ACC weekly honor of the season and the eighth of his career. With eight career selections including Rookie of the Week honors earned as a freshman in 2018, Lawrence now ties Travis Etienne for the most by any active Clemson players. Sammy Watkins holds Clemson’s record for career weekly honors with 11.

Against Wake Forest, Lawrence completed 22-of-28 passes for 351 yards and a touchdown while also adding two rushing touchdowns. He produced the first game of 350-plus passing yards and multiple rushing touchdowns by a Clemson player since Tajh Boyd against NC State in 2012.

Lawrence was the lone ACC weekly honor for the Tigers.

Williams’ 205 all-purpose yards in Saturday’s 27-13 season-opening win over Duke led all FBS players • First Notre Dame player since at least 1996 to reach the 90-yard mark in both rushing yards (112) and receiving yards (93) in a single game • Eclipsed the 100-yard rushing mark while making the first start of his career • Scored two rushing touchdowns and took a screen pass 75 yards for the game’s longest play from scrimmage.

Finished with four catches for 110 yards in Saturday night’s 35-21 win over Western Kentucky • Smith became the first Cardinal to record 100 receiving yards in his Louisville debut since Deion Branch tallied 123 yards against Kentucky in the 2000 season opener.

Miami’s top-graded offensive lineman in Thursday night’s 31-14 season-opening win over UAB • The Hurricanes piled up 337 rushing yards – the second-most recorded by a Miami squad since joining the ACC in 2004 – while Gaynor made his 14th consecutive start in the middle of the offensive line.

Recorded his first two sacks and first two forced fumbles as a Yellow Jacket, all at pivotal moments in the second half of Georgia Tech’s 16-13 win at Florida State • Sacks came on back-to-back plays midway through the fourth quarter with the score tied at 13 • On the second sack, he forced a fumble that was recovered and returned to the Georgia Tech 11-yard line, which set up the Yellow Jackets’ go-ahead field goal with 8:56 remaining • Ryans then forced another fumble that Georgia Tech recovered at its own 35, thwarting FSU’s final threat • Ryans finished with a career-high-tying four total tackles to go along with his two sacks, two TFL and two forced fumbles.

Intercepted a pair of Georgia Tech passes in the first half of Saturday’s game and returned them for 74 combined yards • Samuel’s first pick, which he returned 38 yards came on the opening drive of the season • Samuel’s second interception came in the red zone in the second quarter, and he returned it 36 yards • He also leads active ACC players with 25 career pass breakups after adding two on Saturday.

True freshman amassed 341 yards of total offense (277 yards passing with one touchdown, 64 yards rushing) in his first collegiate game to lead Georgia Tech’s 16-13 win at Florida State • Became the first true freshman QB to lead the Yellow Jackets to a win in a season opener since the NCAA made freshmen eligible in 1972 • Completed 24 passes, the most by any Georgia Tech quarterback since Reggie Ball had 27 completions versus Duke on Nov. 8, 2003 • Sims’ 15 completions in the first half alone matched the most completions by any Georgia Tech quarterback in a full game in the previous 12 seasons (2008-19).