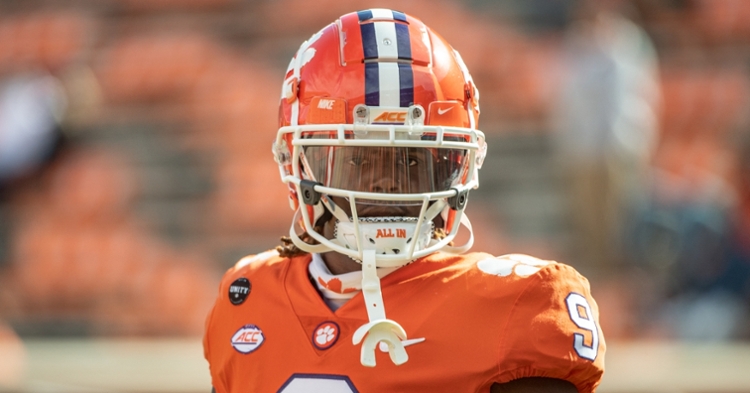 Travis Etienne leaves Clemson with just about any record you can name (ACC photo).

Etienne is a second Tiger to be drafted Thursday and the second headed to the Jaguars -- after Trevor Lawrence made Clemson history as the first No. 1 NFL draft pick -- with the 25th overall selection.

The duo became the first QB/RB pairing from a single school ever drafted by the same team in the first round of an NFL Draft in the Common Draft era.

New Jaguars coach Urban Meyer said they were sweating the pick out late.

"It broke right there at the end," Meyer said, who added that the Jags were zeroing in on Etienne in February. "I'm sitting there and it's like 4th-and-1. Watching to see who the Steelers would take (they took Alabama's Najee Harris) and they took a great player. The guy we had kinda penciled in -- we had him."

Etienne was just as anxious around the selection.

"When that 24th pick was there, I was kinda nervous," Etienne said on a media video call. "I was like, 'I don't know what they're gonna go with.' I was nervous, but I'm definitely humbled and excited to just be down there in Jacksonville. Can't wait. I've never been to Jacksonville honestly.

"I'm just so excited and happy for the opportunity I have to get out there and to have Trevor there -- I think it's going to make the transition easier and we'll help each other a lot...I was secretly rooting for Jacksonville."

Lawrence was obviously excited to see the pick.

"Me and my guy are ready to go to work. Man this is amazing - #DUUUVAL let’s do it, go time!" he said on Twitter.

Etienne and Lawrence are the sixth and seventh Tigers to go in the first round over the last three drafts. They join former Tigers offensive lineman Tyler Shatley in Jacksonville.

“Travis is one of the most explosive, dynamic players that I have ever seen," Clemson coach Dabo Swinney said in a school release. "He is a bigger C.J. Spiller, which is the best way I can describe him based on the guys that I have had experience with. C.J. was probably 199-200 lbs. Travis is just bigger, but he has that same explosiveness. He is dynamic, as far as what he can do in the passing game. He can also return. He has an incredibly humble spirit to him. He is one of the best teammates you can ever have, and he is blue collar.

"He is just a tough, blue-collar football player. He is an every-down player. He is a first-, second- and third-down guy, and he can change the game any play, any quarter. Any time he touches the ball, he is one of those guys that you’ve got to hold your breath, and I can’t wait to see him at the next level and watch him continue to develop as a complete player.”

Etienne made a surprise call back in 2020 to return to school after drawing some late first-round and second projections by analysts, and he used his senior campaign to improve his stock -- particularly as a receiver.

Etienne ranked third on the Tigers last season in catches (48) and receiving yards (588), in addition to his 914 rushing yards and 16 touchdowns as a consensus All-American.

The Louisiana native leaves the ACC as its all-time leading rusher (4,952 yards) and leader in total touchdowns (78), rushing touchdowns (70) and points (468).

NFL.com’s Daniel Jeremiah ranked Etienne as the No. 19 overall draft prospect this week.

- Became the 66th player to have played for Swinney to be drafted into the NFL, including the 15th first-round pick of Swinney’s tenure.

- Tied Flagler as the second-highest-drafted running back from Clemson in the Common Draft era.

- Gave Clemson multiple first-round picks by a single team in one draft for the first time in school history.

- Became the third Clemson player ever drafted by the Jaguars, joining DE Andre Branch (2012) and Lawrence (2021).

This soundbite hits all sorts of different now ?? pic.twitter.com/FzLjY8bOeM

To the @Jaguars at No. 25: Travis Etienne, RB, Clemson@swaggy_t1 | @ClemsonFB

Another Tiger to Jacksonville!! ??