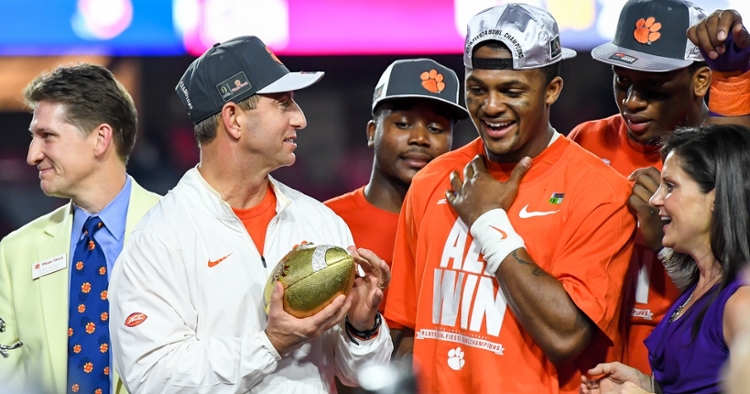 Dabo Swinney says Deshaun Watson has never lied to him.

Former Clemson star quarterback Deshaun Watson's name has been all over the headlines lately as claims of his sexual misconduct have grown and lawyers have disputed the details surrounding the lawsuits.

As of this week, Watson is facing claims from 22 women, and his counsel has cast doubt on the allegations as being "replete with mischaracterizations of Mr. Watson’s conduct" and ranging "from being misleading, to fraudulent, to slanderous.”

Clemson coach Dabo Swinney was asked about his feelings Wednesday in watching the story play out over media and social media.

“Well just like everybody, certainly just disappointed to see his name in the paper for things like that," Swinney told ESPN Radio. "It hurts -- when it’s someone you know. We all read things about people all the time, but when it’s someone you have a personal relationship with, love and respect -- it hurts. So, it’s very disappointing to see his name in the paper and all that stuff."

Swinney indicated that he has spoken to Watson recently and heard his side of the story.

"All I can say is, I only know one Deshaun Watson and that’s the one I’ve had experience with for many years now and that’s all I can go by is the Deshaun I know and the experience I’ve had," Swinney said. "Obviously there’s a legal process that has to take its course and we’ll see, but I believe in Deshaun Watson and know what he’s told me and he’s never lied to me before.