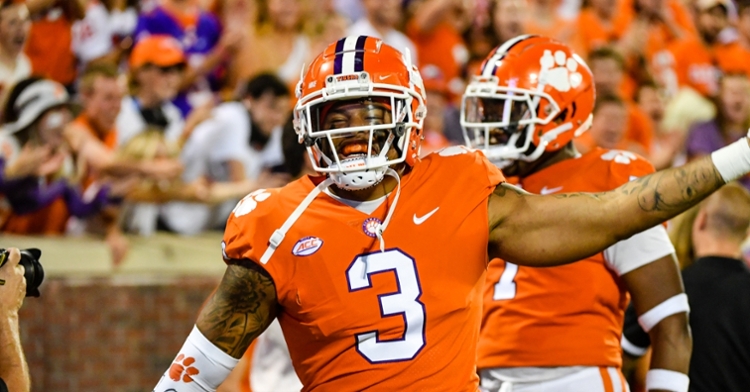 Xavier Thomas saw a big jump in production from his last full season, according to PFF.

A number of Tigers are among the top-rated players coming back according to Pro Football Focus.

The top-rated among the group is coming back from injury with defensive tackle Bryan Bresee, who is rated No. 2 overall.

"Bresee was a prime breakout candidate in his 2021 true sophomore season, but a torn ACL in his fourth game of the year derailed that," Anthony Treash wrote. "The 2020 No. 1 overall recruit played 582 snaps his first two years on campus and earned a 70.8 PFF grade anchored by a 79.8 mark as a pass-rusher. And most of that production came in his true freshman campaign while nearly a quarter of his rushes were with only three men.

"The 6-foot-5, 300-pound interior defender is the total package from a tools perspective and should continue on the breakout path in 2022 with a clean bill of health."

The next highest-rated Tiger in his position group is Trenton Simpson, at No. 3 overall among off-ball linebackers.

"The off-ball linebacker recorded an 88.3 pass-rush grade while racking up seven sacks, 13 hits and 11 hurries. Simpson was one of the 10 highest-graded players at the position in the Power Five from Week 4 on last season and is poised for an even bigger leap next fall," Treash analyzed.

"McFadden has produced at a high level in the collegiate ranks. The 2018 three-star recruit owns single-season PFF grades of 88.3, 83.5 and 87.4 over the last three years serving as a reserve, starting right tackle then starting left tackle," Treash said. "He’s played 1,963 snaps over the course of his career and has only been flagged for two penalties. McFadden took his pass protection to new heights this past season, as he allowed zero pressures in over half of his games played en route to a career-best 84.7 pass-blocking grade."

Both of Clemson's returning defensive end starters are in the top-10 there with Myles Murphy (9) and Xavier Thomas (10).

"Thomas got back on the right track this past season, earning a 76.7 pass-rush grade and 18.7% pass-rush win rate, 11th and fourth, respectively, among returning Power Five edge defenders.

"What’s most encouraging about his performance this past season is his true pass-rush grade was nearly 25 grading points higher than the last time we saw him consistently on the field in 2019."

(Editor's note: As of 1/21 morning, PFF is still doing its top-10 returners series, but Clemson did not have players on the ones so far for QB, TE, WR and interior O-line).