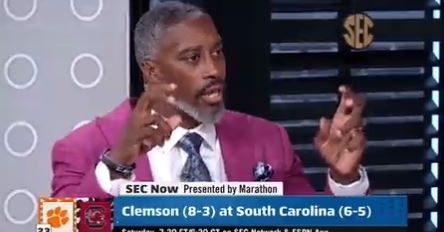 Harper played at Alabama and then 11 years in the NFL and he likes the Gamecocks, potentially big Saturday.

"My neighbor, his son goes to South Carolina and you know what he told his dad? 'You know, dad, I can't make Thanksgiving but for so long because I've got to get back to Columbia and get ready to celebrate and get ready to celebrate with my teammates and the rest of my teammates when we go in there and beat Clemson.' They have this game marked on their schedule for many more weeks now."

Harper cited some of South Carolina's offensive playmakers and FCS transfer QB Jason Brown as keys to the Gamecocks coming out on top.

"Josh Vann. ZaQuandre White. That is how they will do it," Harper said. "You have to run the football and be specific in the way you do it, and Jason Brown, protect the football. Protect the football, and be ready to take your shots against the (Harper using an air quote symbol with his hands) organized chaos defense of Clemson, where they call plays and think you're ready on that situation but that is when you take advantage of them. Second-down playaction passes."

Harper also offered a critique of Clemson's QB to help out the South Carolina defense.

"Understand who you're playing at quarterback. DJ Uiagalelei is good - really good, but when you take away the first look, he's only a half-field reader," said Harper. "If he starts to his right, he never gets back to his left. Understand that if I'm a safety, when he starts that way and go that way and it puts you closer to a play being made. Understand those things now -- if you don't know that and your coach ain't telling you, listen to me."

Clemson is an 11.5-point favorite currently.

The Gamecocks are 5-1 at home this season, including wins over Auburn and Florida in the last month. Clemson has won four in a row and 6-of-7 en route to a No. 23 ranking from the College Football Playoff committee Tuesday.

The Tigers have won six in a row in a series that is renewing after a year off for an SEC policy last season to only play conference games in the regular season.

“I’m calling my shot, South Carolina is gonna win this game and they might win by double digits.”@Harp41 is taking @GamecockFB over Clemson ???? pic.twitter.com/9UD4D8o71J