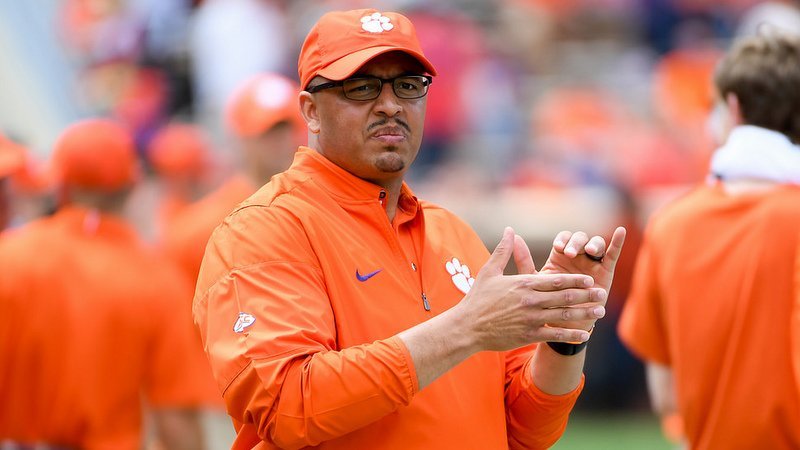 Could Elliott be heading to the Coastal?

Clemson offensive coordinator Tony Elliott is being reported as a top candidate for a pair of ACC schools currently.

Sports Illustrated senior writer Pat Forde reported Wednesday afternoon that Virginia has "returned its focus" to Elliott for their open head coaching job and Elliott's interest is mutual there, saying he "would prefer that to interest from Duke." ESPN's Chris Low reported that Elliott is Virginia's top candidate now and was having a meeting with its officials Wednesday and multiple reports have Elliott headed to Charlottesville, Virginia in person with his family.

This comes on the heels of a News & Observer report Tuesday afternoon that had Elliott in what appears to be a final two for the Blue Devils, along with Texas A&M's Mike Elko:

"The school is looking for a new coach after parting ways with David Cutcliffe, Duke’s coach since 2008, on Nov. 28. While Elko and Elliott are among the final candidates being considered, the search process remains ongoing...

"Though Duke is a private school that doesn’t release contract details, the IRS 990 form the school is required to annually file with the federal government showed Cutcliffe’s salary at $2,848,237. But with the changing landscape of college athletics finances, Duke will be certainly increasing that salary package for its next coach.

"Their continued involvement, after in-person meetings with Duke officials, shows Elliott and Elko have not been deterred by any financial factors.

"If hired, Elliott would become the first person of color to serve as Duke’s head football coach."

Forde's report says that the Virginia search "could accelerate today," while the Duke report expressed the school's wish to close its search out by the end of this week.

Former Virginia standout and Penn State defensive coordinator Anthony Poindexter had been reported to be in the running for the Cavaliers job as well, but he told ESPN's Adam Rittenberg that he was staying with Penn State.

Sources: Virginia has returned its focus to Tony Elliott and the Clemson assistant would prefer that to interest from Duke. Nothing done, but this could accelerate today.

Poindexter had been a top candidate for the head-coaching job at #Virginia, where he was an All-America defensive back and longtime assistant coach. Poindexter entered the College Football Hall of Fame on Tuesday.