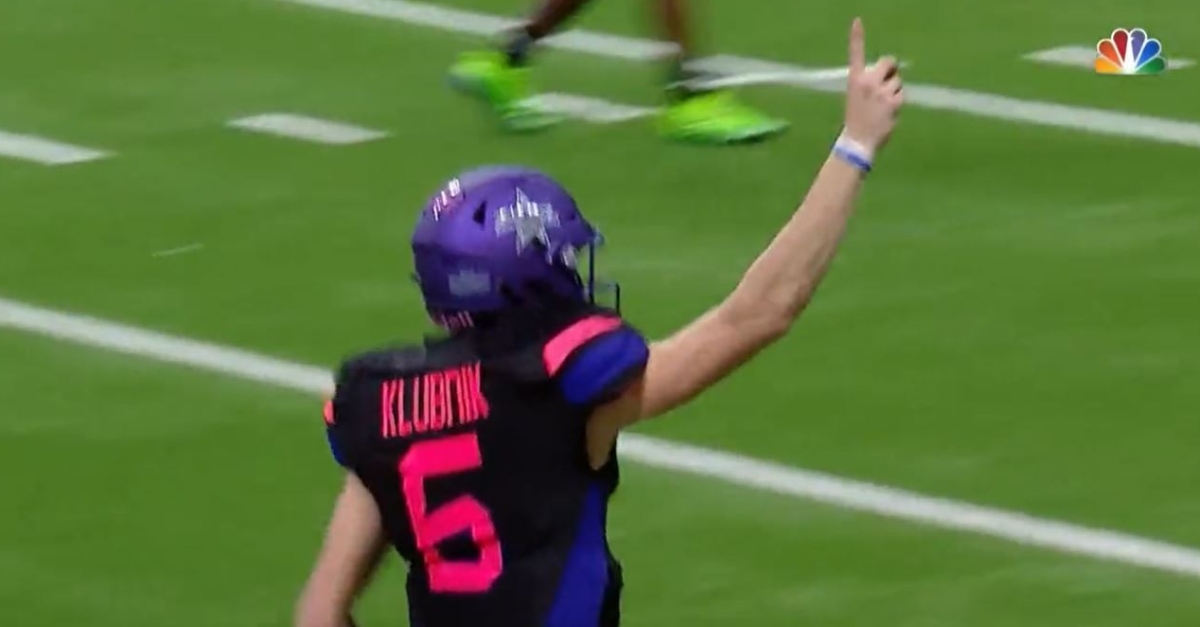 Klubnik will be on campus working with his new offensive coordinator and QB coach Brandon Streeter soon.

Clemson 5-star QB signee Cade Klubnik put together one last standout effort as a high school athlete before he heads to Clemson this month.

"Such an amazing week with such good players, to be surrounded with these kind of players and just great people every day," Klubnik said when given the award. "The coaches that are here -- just spectacular at knowing the game and spectacular human beings. Just makes it so fun."

Klubnik wrapped his high school career with Westlake (Tx.) last month by leading the school to a third state title in a row.

He was named MaxPreps' national player of the year too after throwing for 3,251 yards with 43 touchdowns to three interceptions with a 71.3 completion rate over 13 games.

Check out some of his more impressive throws on Saturday in San Antonio below:

He found time to live out another football dream in Texas, though, leading the West to victory @AABonNBC. #txhsfb pic.twitter.com/8poXmnRi1A

Nice throw back to Rayshon Luke by Clemson commit Cade Klubnik for the TD. Luke will commit later today to either Arizona, San Jose State & Louisville.

BEAUTIFUL throw on the run by Cade Klubnik and sideline catch by Kevin Coleman for the first down on 3rd & 15! SHEESH!#AllAmericanBowl #CollegeFootball pic.twitter.com/bbLvxueb8Z

The @ClemsonFB commit has had quite the year. pic.twitter.com/1vUvnklmb2

Thank you to all of my coaches, teammates, mentors, and most of all my family. God is so good. https://t.co/kdWKBq1xn4

Ranked as the top quarterback in the nation by Sports Illustrated, PrepStar, and Rivals.com … ranked as second-best quarterback by 247Sports and third by ESPN.com … Gatorade Player of the Year in Texas and was named as one of three finalists for National Gatorade Player of the Year for 2021 … named MVP of the Elite 11 Camp in the summer of 2021 … guided Westlake High School in Austin, Texas to state championships in 2019 and 2020 … his 2021 is currently 15-0 and will play in the state championship game Dec. 18 … plans to play in the All-American Bowl in San Antonio on NBC in January … ranked as the No. 6 overall player in the nation by Rivals.com and as the fourth-best player in Texas … ranked as the No. 16 player in the nation by 247Sports, which also listed him as the second-best quarterback and third-best player in Texas … five-star quarterback according to Rivals.com, 247Sports and PrepStar … rated No. 24 overall in the nation by PrepStar, which listed him as the sixth-best player in Texas … ESPN.com ranked him as the nation’s No. 66 overall player and third-best quarterback … rated by On3 Sports as the nation’s No. 36 overall prospect, the nation’s fourth-best quarterback and the ninth-best prospect in Texas … prior to the final game of his prep career, he played in 37 career games (including 36 Westlake wins), including a 26-0 mark as a starter his last two years … completed 467-of-666 (70.1 percent) passes for 7,146 yards and 82 touchdowns vs. just six interceptions prior to the 2021 state championship, adding 189 carries for 1,259 rushing yards (6.7 avg.) and 31 touchdowns … had 8,405 career yards of total offense on 855 plays (9.7 yards per play) … accounted for 113 touchdowns — 82 passing and 31 rushing … came off the bench as a sophomore when he completed 53-of-69 passes (76.8) for 680 yards, eight touchdowns and just one interception … as a junior, completed 239-of-354 passes (67.5) for 3,495 yards, 35 touchdowns and just three interceptions … also had 583 yards rushing in 98 attempts for a 5.9-yard average and 15 touchdowns … had standout games against Smithson Valley, when he completed 25-of-29 passes for 345 yards and four scores, and against San Marcos, when he rushed for four touchdowns … team had a 14-0 record and won the state title in 2020 against highly rated quarterback Quinn Ewers and Southlake Carroll … as a senior in 2021, enters the state title game having completed 175-of-244 (71.7) passes for 2,971 yards and 39 touchdowns against just two interceptions … also rushed 62 times for 405 yards and 12 scores … missed three games with an injury … threw six touchdowns passes in a game twice as a senior and had 300-yard passing games against Trinity (322), Mansfield Summit (375) and in the state semifinals against Katy (310) … hit 20-of-27 passes for 310 and five touchdowns in that semifinal vs. Katy … coached by Todd Dodge at Westlake High School, the same high school program that produced Super Bowl MVPs Drew Brees and Nick Foles … his brother, Reed, played wide receiver at Yale … committed to Clemson on March 2, 2021 … plans to enroll at Clemson in January 2022 … wore No. 6 in high school … born Oct. 10, 2003.