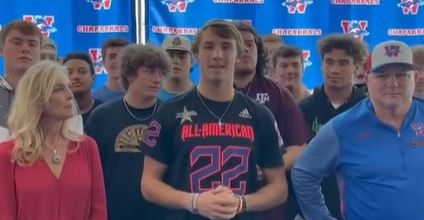 Klubnik has had a big year that started with a state title this winter then a commitment to Clemson in March.

Five-star Clemson QB commit Cade Klubnik grew up going to one of the most prestigious high school all-star games with his dad -- and he now he's primed to play in it.

Klubnik is headed for the 2022 All-American Bowl in January -- just a couple hours down the road from his Austin, Texas home in San Antonio.

"It's definitely one of the biggest honors I've ever received as a football player," Klubnik said. "I always just thought it was a dream of mine, but I kept the first ticket I ever got and I've got it on the mirror in my bathroom and look at it every single day and have for the last four or five years and it's always motivated me every day. To be able to put on this jersey and say I'm playing in the game, it means everything."

Klubnik has been on the shelf recently after suffering a non-throwing shoulder injury, but he has led an undefeated Westlake team completing 70.9% of his throws for 1,476 yards and 20 touchdowns to two interceptions, also averaging 5.9 yards per carry with six rushing scores.

Watch the ceremony and stick around for more of his own interview below:

He did a more in-depth interview with the Weekly Slant also this week: