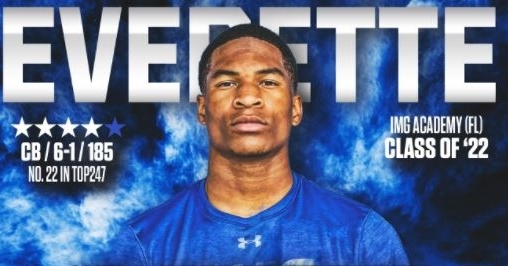 Clemson went back to IMG Academy for another big defensive pledge -- the second within the span of an hour.

Everette is rated as high as the No. 4 cornerback in the nation and top-25 overall (22).

Everette named Clemson in a top-5 with Georgia, Oregon, North Carolina and Florida State back in May. Everette did a fake-out in his announcement Saturday by picking up a UNC hat first but then throwing it to the side and revealing he had a Clemson shirt on underneath and donning the Tigers cap as well.

"Talking about this commitment, I think what's big here is Clemson is taking a commitment essentially from North Carolina," 247Sports' Andrew Ivins said on the announcement. "(247Sports') Steve (Wiltfong) mentioned that this was essentially a two-team battle down the stretch. I think over the last week or so there was some smoke that maybe North Carolina was going to be the pick for Daylen. And at the end of the day, it's Dabo Swinney and the Tigers who win out and why is that important? Look, quarterback play is improving in the ACC and North Carolina continues to recruit well. That's a team that Clemson can potentially face one day in the ACC title game. The fact that Daylen is going to Clemson and not North Carolina is a major win for the Tigers...

"This (2022) defensive back group is top-heavy at corner and Clemson is going to clean up here. Some defensive back coaches at other schools in the country are shooting me texts and saying, 'Man, Clemson just seems to be drafting who they want at the cornerback spots.'"

"I don't think he's going to need much time," Ivins said. "We were at IMG Academy back in the spring for their spring practices and talking to the strength staff there, which is essentially a college strength staff -- they're raving about Daylen's work ethic."

After a commitment drought from early March until mid-June, Clemson has added six 2022 commitments in just over a month.

WOAH!!! He got us with the pump fake! @ClemsonFB pulls in yet another major recruit with 4?? corner @DaylenEverette ????