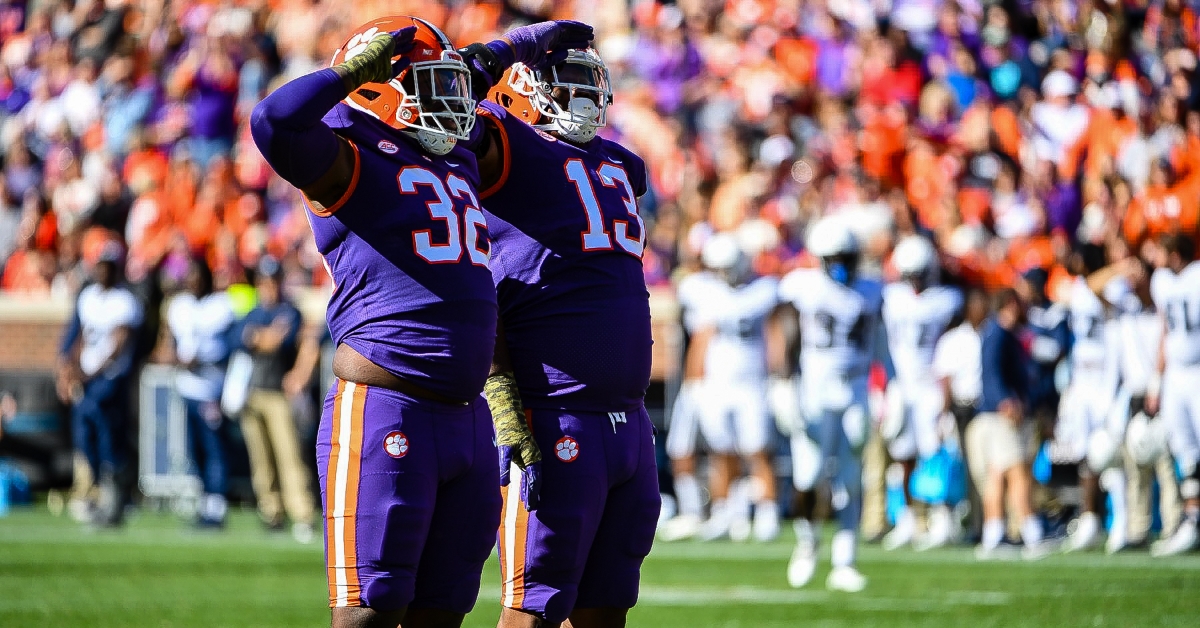 Clemson won its 33rd consecutive home game to extend its school record for both the longest home winning streak and longest home unbeaten streak in school history (as well as extend the nation’s longest active home winning streak). Of the 131 players on Clemson’s 2021 roster, 126 have never experienced a home loss in their Clemson careers. Five sixth-year “super seniors” on Clemson’s 2021 roster were on the 2016 team that recovered from a home loss to Pitt by winning the national championship that season.

Clemson is now 1-0 all-time against UConn.

Clemson improved to 64-38-4 all-time in its first meeting with its 106 all-time opponents, including a 15-1 mark in first meetings since 2003. Clemson has won 17 of its last 19 games when making its all-time debut against a new opponent.

Clemson improved to 30-6-2 against FBS independents since the NCAA split Division I into the divisions now known as the Football Bowl Subdivision and Football Championship Subdivision in 1978.

Dabo Swinney earned his 147th career win in his 14th season (including an interim stint in 2008) to tie Tom Osborne (147) for the fourth-most wins through the first 15 seasons of a coaching career in FBS history.

Clemson remained undefeated on ACC Network broadcasts since appearing in the channel's first live game broadcast in the 2019 season opener. Clemson went 4-0 on ACCN in 2019, 3-0 on ACCN in 2020 and is now 4-0 on the network this season.

Clemson improved to 74-6 in regular season play since the start of the 2015 season. All six of Clemson's regular season losses in that span have been decided by a final margin of 10 or fewer points.

Clemson has now won 17 of its last 18 November games.

Clemson has now won 93 of its last 95 games, including each of its last 56, when leading at halftime.

Clemson now has a 113-2 record when totaling more first downs than its opponent since 2011.

The only points Clemson allowed came on a return on the game’s opening kickoff. Clemson recorded its fourth game of the season in which it did not allow an offensive touchdown. The only team in the country with more is No. 1 Georgia (five).

Clemson recorded six sacks, its most since last year’s ACC Championship Game vs. Notre Dame (six). Clemson’s season-high in sacks entering the game was five, set against Florida State in Clemson’s most recent home game prior to Saturday. Clemson has 11 sacks in its last two home games.

Clemson has now recorded at least four sacks against three consecutive opponents for the first time since a four-game streak across the final two games of 2019 and first two games of 2020.

Clemson ran 99 plays, a season high and its most since running 99 against Alabama in the College Football Playoff National Championship Game to end the 2016 season.

Clemson has now scored at least 30 points in three consecutive games for the first time since the first 11 games of the 2020 season.

Clemson played four quarterbacks, with the quartet combining for 27-for-57 for 347 passing yards with two touchdowns through the air.

Quarterback DJ Uiagalelei completed 21-of-44 passes for 241 yards with one touchdown and one interception. His 241 yards were a season high and his 44 attempts tied his career high set at Notre Dame last season.

Phommachanh was playing against a UConn team for which his brother, Tyler, plays quarterback. Tyler was unavailable to play for the Huskies on Saturday following a knee injury suffered earlier in the season.

Running back Phil Mafah scored his second career rushing touchdown on a two-yard run in the third quarter. With his only previous score coming at Pittsburgh, it was his first career touchdown in Death Valley.

Tight end Jake Briningstool recorded a career-long 31-yard reception on a pass from Uiagalelei in the second quarter.

Briningstool later scored on a 25-yard pass from quarterback Billy Wiles in the fourth quarter.

The touchdown was the first in the careers of both Briningstool and Wiles.

With the touchdown pass by Wiles, Clemson has now had a walk-on quarterback throw a touchdown pass in back-to-back seasons, as Hunter Helms threw for two touchdowns at Georgia Tech in 2020.

Wide receiver Justyn Ross extended his streak of consecutive games with a reception to 37 to pass Jerry Butler (36 consecutive games from 1975-78) for sole possession of the third-longest streak in school history.

Cornerback Mario Goodrich recorded the game’s first takeaway on an interception in the second quarter. It was his fourth career interception and his first of the season.

Cornerback Sheridan Jones added his first interception of the season in the third quarter. It was his second career interception and his first since last October against Miami (Fla.).

The game was Clemson’s second multi-interception game of the season and its first since Oct. 2 vs. Boston College.

Murphy forced a fumble on a full sack in the second quarter, his first forced fumble of the season and the fourth of his career.

Defensive tackle Tyler Davis recorded his first full sack of the season to push his career sack total to 9.0.

With a second-quarter sack, linebacker Trenton Simpson became the first Clemson player with at least half a sack in four straight games since Clelin Ferrell in 2018.

Defensive end K.J. Henry added his first full sack of the season in the second quarter.

Potter, who was 3-for-3 on field goals last week, has now kicked at least three field goals in consecutive games for the first time in his career.

During the game, Potter (312 career points) became the eighth player in school history with 300 career points.

Spiers, Swinney and linebacker James Skalski each played in their 66th career game to extend their school record for most career games played.

Swinney gave Clemson its first lead on a six-yard rushing touchdown on a fake field goal in the first quarter.

The rush came on Swinney’s first carry of the season and the fourth of his career.

The touchdown was the second total touchdown of Swinney’s career, joining an eight-yard touchdown reception against Louisville in 2018.

Linebacker Trenton Simpson led Clemson down the Hill with the American flag on Military Appreciation Day. His father, Command Sgt. Maj. Timothy D. Simpson, served 17 overseas tours since 1994 before retiring this past May after a decorated career with the Army Rangers.