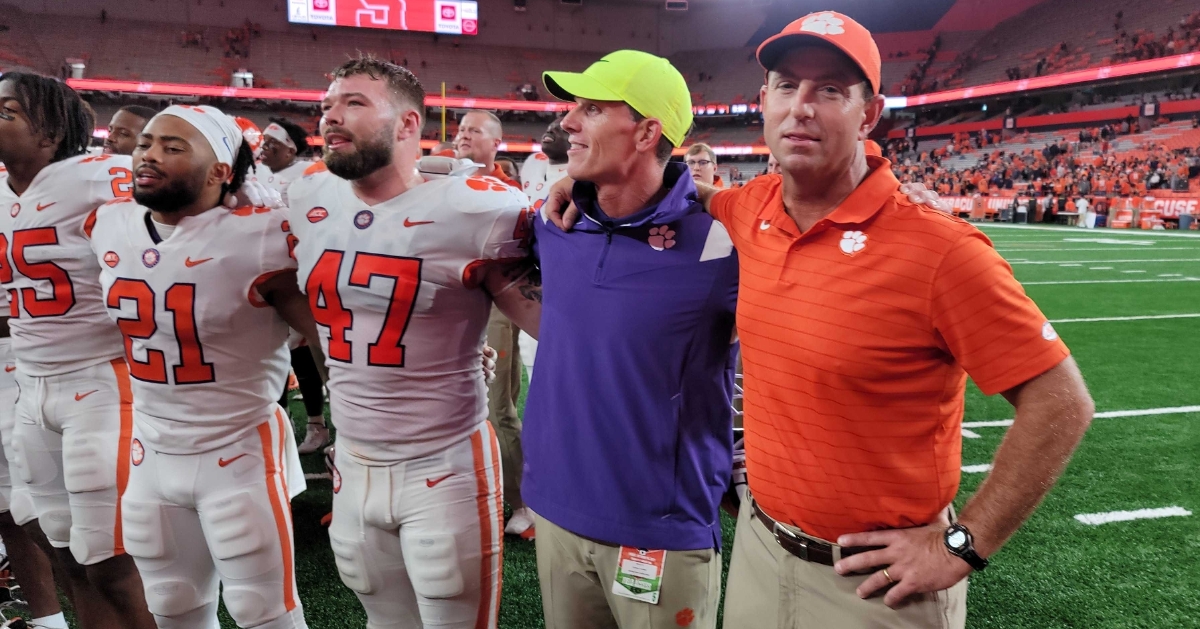 Clemson has now won back-to-back games by eight or fewer points (one possession) for the first time since its 2016 national championship season against NC State and Florida State.

Clemson did not have an offensive turnover and has now produced consecutive games without a giveaway for the first time since a three-game streak against South Carolina, Virginia and Ohio State in 2019.

Clemson scored a touchdown on the drive following the game’s lone turnover, winning the points-off-turnover battle, 7-0.

Allen’s eight receptions were the most by a Clemson tight end since Brandon Ford’s nine receptions against LSU in 2012. That performance by Ford remains tied with John McMakin (nine vs. Florida State in 1970) for the Clemson record for receptions by a tight end in a single game.

Quarterback DJ Uiagalelei completed 21-of-34 passes for 181 yards with one touchdown and no interceptions. His 21 completions were a season high.

Wide receiver Joseph Ngata opened the scoring on a 19-yard touchdown pass from Uiagalelei in the second quarter.

The touchdown reception was Ngata’s first of the season and the fourth of his career. It was his first since Nov. 16, 2019 against Wake Forest.

Running back Kobe Pace led Clemson with 14 carries for 76 rushing yards with a touchdown.

Pace gave Clemson the lead at halftime on a two-yard touchdown run with nine seconds remaining in the first half.

The rushing touchdown was both Pace’s third of the season and third of his career.

Pace has now rushed for a touchdown in consecutive games for the first time in his career.

With a catch on Clemson’s first offensive play from scrimmage, wide receiver Justyn Ross extended his streak of consecutive games with a reception to 33.

The interception was the first of Venables’ career.

Venables added his first career sack in the third quarter, chasing down Shrader for a loss.

Clemson recorded at least one takeaway in a seventh consecutive game, dating to last season, for the first time since a nine-game streak in 2019.

Cornerback Mario Goodrich recorded a career-high four pass breakups, one shy of the school record of 5 set by Perry Williams against Virginia Tech in 1985.

Clemson’s streak streak of five straight games without allowing a 100-yard rusher concluded when Syracuse running back Sean Tucker eclipsed the century mark on the ground. Tucker recorded only the seventh 100-yard rushing performance against Clemson since the start of the 2018 season.

Spiers, Swinney and linebacker James Skalski each played in their 62nd career games to extend their school record for most career games played.

Spiers converted a fourth-and-5 late in the second quarter on a 17-yard pass to Allen.

It was the second straight season in which Spiers has converted a fourth down on a fake punt against Syracuse. A year earlier, Spiers rushed for six yards and a first down on a fake against the Orange.

Spiers is now 4-for-6 passing in his career for 35 yards.

Clemson possessed the ball for a season-high 32:59, winning the time of possession in a game for the first time since last November against Pitt.

Head Coach Dabo Swinney coached his 179th career game to pass Virginia and Wake Forest’s Al Groh (178) for sole possession of the fourth-most career games coached as a member of the ACC.

Clemson played Syracuse while the Tigers were unranked in the AP Top 25 for the first time in series history. Clemson was AP-ranked in each of the nine previous meetings, including a Top 3 ranking in seven of its eight previous matchups with the Orange. Clemson, however, remained ranked in the AFCA Coaches Poll this week and has been ranked in the Top 25 of one of the major polls in every game against Syracuse all-time.

Clemson improved to 8-2 all-time against Syracuse.

Clemson improved to 4-1 in road games at Syracuse all-time.

Clemson won its first game on a Friday since 2016 against Boston College.

Clemson improved to 28-1 in October games in the College Football Playoff era (since 2014).

Clemson defeated an ACC Atlantic Division opponent for the 39th time in its last 41 opportunities. Those figures include games against traditional Atlantic opponents in a divisionless season in 2020.

Clemson improved to 55-4 against ACC opponents (including postseason play) since the start of the 2015 season.

Clemson improved to 71-5 in regular season play since the start of the 2015 season. All five of Clemson's regular season losses in that span have been decided by a final margin of seven or fewer points, including two double overtime games.

Clemson, which was unranked in the AP Poll this week after being No. 25 in the AP Poll prior to its most recent game, improved to 28-6 under Dabo Swinney in games in which it enters ranked lower in the AP Poll than it did in its previous contest. That record includes season openers in which Clemson opened a season lower than its ranking from the final game of the previous campaign.

Clemson improved to 112-13 against AP-unranked teams under Dabo Swinney. The win made Clemson 89-3 against unranked teams since the start of the 2012 season.

Clemson had 20 first downs to Syracuse’s 18 and now has a 110-2 record when totaling more first downs than its opponent since 2011.

Clemson has now won 30 of its last 37 one-possession games since 2011, adding to the highest winning percentage in the country in one-score games in that span.