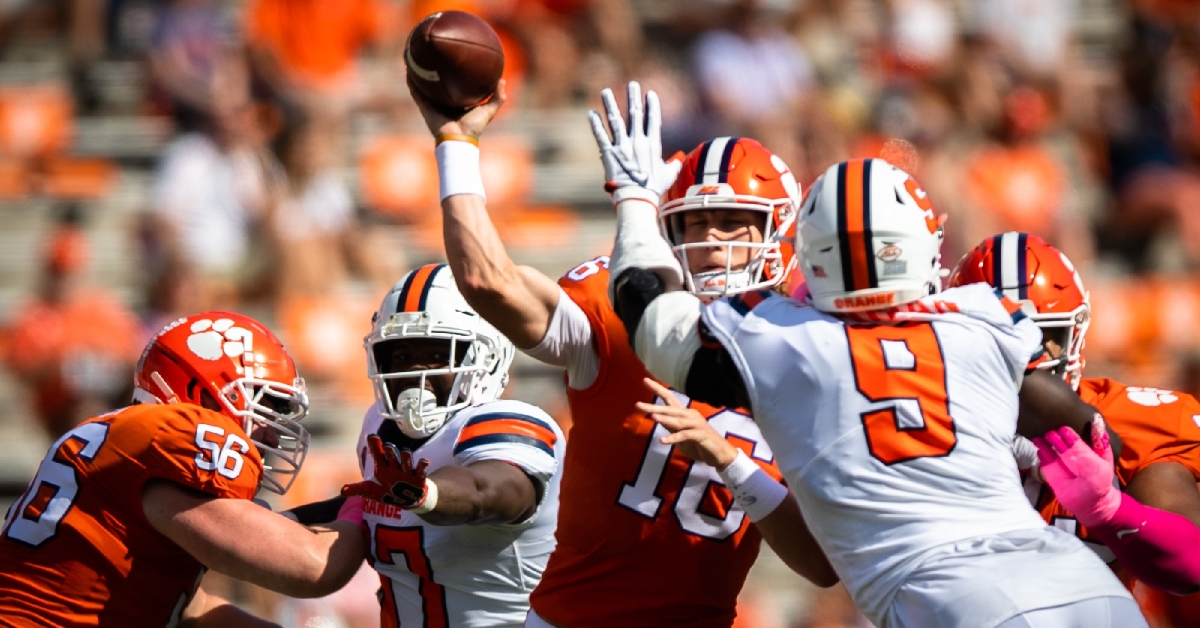 Clemson’s three interceptions gave the Tigers their second three-interception game of the season, joining the team’s win against Miami (Fla.) two weeks ago.

Clemson passed for 308 passing yards and has now produced back-to-back 300-yard passing performances for the first time this season and for the first time since a four-game streak against NC State, Wake Forest, South Carolina and Virginia last season.

Etienne’s three rushing touchdowns matched his career high, set previously five times including most recently against Boston College in October 2019. It was his ninth career game with three or more total touchdowns (including receiving touchdowns), his first since last year’s Fiesta Bowl against Ohio State.

Etienne now has seven career rushing touchdowns against Syracuse, his most against any opponent.

Etienne scored a touchdown of any kind in a 41st different game of his career, matching the FBS record held by San Diego State's Donnel Pumphrey from 2013-16. (*NOTE: Entering the 2020 season, the NCAA FBS Record Book listed Florida's Tim Tebow (38 games from 2006-09) and Louisiana Tech's Kenneth Dixon (38 from 2012-15) as the record-holders for most career games scoring a touchdown. Etienne was believed to have broken that record by scoring in a 39th career game against Miami. However, after additional research by ESPN, the NCAA acknowledged an error in its record book and updated it to reflect Pumphrey scoring a touchdown in 41 games from 2013-16.).

During the game, Etienne (4,583) became the 12th player in school history to record 4,500 career yards of total offense. Every player ahead of him in school annals recorded at least 3,300 passing yards to help reach that figure; Etienne has 23 career passing yards.

On his first score, a 25-yard touchdown run in the first quarter, Etienne passed Woodrow Dantzler (68) for sole possession of fourth on Clemson's all-time leaderboard for career touchdown responsibility. Etienne is fourth on that list despite not having a passing touchdown to his credit in a category that credits both touchdowns scored and touchdowns thrown.

During the game, Etienne (64) entered the Top 10 in FBS history in career rushing touchdowns according to official NCAA records. Etienne passes Donnel Pumphrey (62) and Ron Dayne (63) and is now tied with Anthony Thompson and Cedric Benson (64 each) for seventh-most in FBS history.

With his second touchdown of the game, Etienne became only the seventh FBS player since 1956 to record 70 career total touchdowns.

Quarterback Trevor Lawrence completed 27-of-43 passes for 289 yards with two touchdown passes. His 43 pass attempts were a career high, surpassing his 41 against Miami earlier this season.

WIth his second touchdown pass of the game, Lawrence (97) passed Marquise Williams (96) for fifth on the ACC's all-time career leaderboard for touchdown responsibility.

Lawrence recorded an eight-yard reception on a pass from Amari Rodgers. It was his third career reception, but his first that didn’t come from himself on a batted pass.

Lawrence opened the scoring on a 25-yard touchdown pass to wide receiver Cornell Powell on the game’s opening drive.

Powell has now scored a touchdown in consecutive games for the first time in his career.

Tight end Davis Allen caught his third touchdown pass of the season on a 17-yard pass from Lawrence in the second quarter.

Allen became the first Clemson tight end with a touchdown catch in three consecutive games since Jordan Leggett against Georgia Tech, Louisville and Boston College in 2016.

Receiver Amari Rodgers recorded a career-high eight receptions for 91 yards. He now has four straight games with at least six receptions and has caught at least five passes in five of Clemson’s six games this season.

Defensive back Nolan Turner recorded the game’s first takeaway on an interception on Syracuse’s second possession. It was his single-season career-high third interception of 2020.

Turner became the first Clemson player with an interception in back-to-back games since both he and Isaiah Simmons picked off passes against Virginia and Ohio State last season.

The fumble returned by Booth was forced by defensive tackle Bryan Bresee on a half-sack split with linebacker Mike Jones Jr.

It was Clemson’s second fumble return for touchdown this season, joining James Skalski’s scoop and score against The Citadel. Clemson has now recorded multiple fumble return touchdowns in a single season for the first time since 2013.

Jones added his first career interception in the fourth quarter, returning it 40 yards to the Syracuse three-yard line to set up a Clemson touchdown.

Defensive back Jalyn Phillips recorded his first career interception in the fourth quarter. The interception came one play after Phillips made a touchdown-saving tackle on a 61-yard rush by Syracuse.

Defensive end Xavier Thomas recorded his first sack of the season. He has had one sack in each of his three career games against Syracuse.

Running back Lyn-J Dixon opened the game with a 49-yard kickoff return, three yards shy of his season-long and career-long 52-yarder against Virginia.

Punter Will Spiers, who was celebrating his 23rd birthday, averaged 53.6 yards on five punts, including four of 50 yards or more. It was his third straight game with a punting average of 50.0 yards or more, a career-long streak.

Spiers recorded a career-long-tying 64-yard punt in the first quarter, matching 64-yard punts against Louisville in 2017 and against Charlotte in 2019.

Spiers converted a fourth-and-3 on a fake punt with a six-yard rush in the second quarter. It was the third career first down to which he’s contributed but his first via rush. Spiers threw for a first down on a fake punt in 2017 and threw for one last week in his role as an emergency quarterback.

Syracuse scored on a 39-yard interception return for touchdown in the second quarter. It ended a streak of 15 full games in which Clemson had not allowed a single point off of turnovers. The streak covered more than a calendar year, dating to Sept. 28, 2019. Clemson’s defense still has not surrendered any points off turnovers since that date, as the seven points off turnovers surrendered Saturday were given up by the offense.

Clemson played its 20th game all-time while ranked No. 1 in the AP Poll, the 15th-most since the poll's inception in 1936. It was Dabo Swinney's 19th game coached at No. 1, tying him with Jim Tressel for 17th all-time.

Clemson has been ranked in the AP Top 25 in every contest against Syracuse all-time, including a Top 3 ranking in seven of its eight most recent matchups with the Orange since 2013.

Clemson improved to 18-2 all-time when ranked No. 1 by the Associated Press. Clemson has never lost a regular season game as the nation's top-ranked team.

Clemson won its 26th consecutive home game to extend its school record for the longest home winning streak in school history. Of the 119 players on Clemson's 2020 roster, 110 have never experienced a home loss in their Clemson careers. Nine fifth-year seniors on Clemson's 2020 roster were on the 2016 team that recovered from a home loss to Pitt by winning the national championship that season.

Clemson (26 straight home wins) now takes sole possession of the school record for its longest home unbeaten streak. The previous record had been set when Clemson went unbeaten in 25 straight games at Memorial Stadium from 1980-84, posting 23 wins and two ties under Danny Ford in that span.

Though 2020 is technically being played sans divisions, Clemson defeated a traditional ACC Atlantic Division opponent for the 16th straight time and for the 36th time in its last 37 opportunities.

Clemson won its 27th consecutive game against an ACC opponent, including postseason play. The 27-game winning streak against conference opponents pulls Clemson within one game of the 2012-15 Florida State Seminoles (28) for the second-longest streak in ACC history.

Clemson improved to 25-1 in October games in the College Football Playoff era (since 2014).

Clemson has won 48 of its last 50 games against ACC teams.

Clemson has now won 84 of its last 86 games when leading at halftime, including each of its last 47 such games.

Clemson improved to 106-2 since 2011 when leading after three quarters.

Clemson now has a 104-2 record when totaling more first downs than its opponent since 2011.

Clemson is now 62-3 when winning the turnover margin since 2011.

Clemson is now 45-1 at home since 2014, the best winning percentage in the country.

Clemson has now won 86 straight games when holding teams under 23 points (dates to 2010).

Clemson improved to 7-2 all-time against Syracuse.