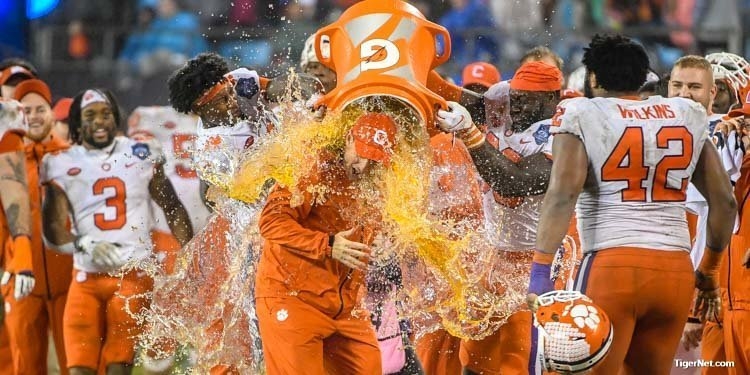 The Tigers are the fifth team in ACC history to win at least 13 games in a season … Clemson’s teams of 2015 and 2016 were the most recent prior to Saturday night, with each posting 14-1 records.

The Tigers’ current winning streak of 13 consecutive games is tied with Notre Dame for the third-longest active streak in the nation … UCF leads with 25 consecutive wins, and Alabama has won 15 games in a row.

With the victory over the Panthers, the Tigers have come out winners in each of their most recent games against ACC opponents … Pitt held a 2-0 edge in the all-time series between the schools prior to Saturday night, including a 43-42 win over Clemson’s eventual national championship team in 2016.

Clemson limited the Panthers to an ACC Championship Game record low eight yards passing … Virginia Tech set the previous low when it limited Boston College to 84 yards through the air in the 2008 game at Tampa.

The Tigers set another defensive record by limiting Pitt to 200 total yards. Clemson topped its own previous record for fewest yards allowed in the title game (214 in last year’s 38-3 win over Miami).

Clemson led 28-10 at halftime, which tied the Dr Pepper ACC Championship Game record for points in a half … The Tigers matched Florida State’s total in the 2014 game versus Georgia Tech.

Etienne, the ACC Player of the Year and the conference leader in rushing yardage with 1,307 coming into the game, rushed for a total of 24 yards on six carries in last year’s win over Miami in the ACC Championship Game.

Etienne finished with 156 yards rushing on the night … Etienne, who rushed for 143 yards by halftime, became the fifth player in Clemson history to rush for more than 100 yards in an ACC Championship Game.

Etienne’s 3-yard scoring run with 9:29 remaining in the first quarter was Clemson’s school-record 76th touchdown of the season. Clemson will enter the College Football Playoff with 80 touchdowns on the year.

ACC Rookie of the Year Trevor Lawrence finished the night 12-of-24 passing for 118 yards and two touchdown throws to sophomore wideout Tee Higgins … Lawrence has now thrown at least one touchdown pass in eight consecutive games and 12 of the 13 games in which he has appeared this season.

With a 53-4 record for over the past four seasons, Clemson boasts the winningest senior class in both school and ACC history … The Tigers’ current senior class is one of just two in NCAA Division I that has reached the 50-win plateau.

Pitt’s 117 yards rushing were the most allowed by Clemson in the first half this year.