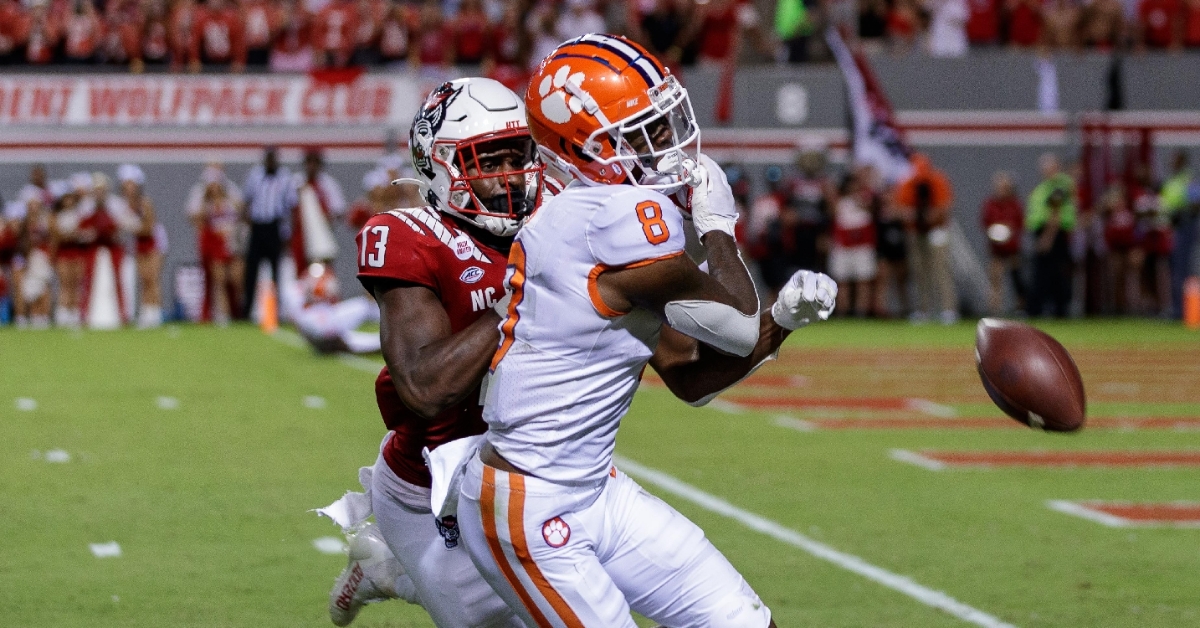 The game was Clemson’s 15th overtime contest in school history. It was Clemson’s second overtime game against NC State all-time, joining a 24-17 overtime win in 2016.

The touchdown came on the 38th drive faced by Clemson’s defense this season.

Uiagalelei recorded a career-long 37-yard rush in the fourth quarter on a drive that eventually evened the score at 14-14. It surpassed his previous long, a 30-yard run against Boston College last year.

Ross’ eight receptions were his second-most in a game in his career, trailing his nine at South Carolina in 2019.

Ross has now caught a pass in 31 consecutive games.

Clemson opened the game’s scoring on its second possession on a 32-yard touchdown pass from Uiagalelei to Ross. Clemson dropped to 60-3 when scoring first since 2015.

The first-quarter touchdown reception was Ross’ 19th of his career, temporarily tying him with current Clemson graduate assistant Artavis Scott (19 from 2014-16) for seventh-most career receiving touchdowns in school history.

During the contest, Ross pushed his career receptions total to 134, passing the career total of Wide Receivers Coach Tyler Grisham, who had 132 catches from 2005-08.

Running back Will Shipley rushed for a five-yard touchdown in the fourth quarter to even the score at 14-14.

In doing so, Shipley became the first Clemson true freshman with a rushing touchdown in three consecutive games since Travis Etienne's four-game streak late in the 2017 season.

Linebacker Baylon Spector recorded a team-high 19 tackles. His 19 tackles marked the most by a Clemson player in a single game under Dabo Swinney, one ahead of Spencer Shuey’s 18 tackles against Georgia in 2013.

Spector’s 19 tackles were the most by a Clemson player since 2002, when John Leake recorded 21 stops against Maryland.

Thomas recorded his first full sack of the season in the second quarter, pushing his career total into double digits. He now sits at 11.5 career sacks.

Thomas added another sack in the second quarter, stripping the ball for his third career forced fumble. It was Thomas’ first forced fumble since Nov. 28 last season against Pitt.

Safety Nolan Turner recorded his second career sack in the third quarter. It was his first since the third game of his now 56-game career at Louisville in 2017.

Clemson stopped a two-point conversion attempt in the second overtime. Opponents are now 1-for-16 on two-point attempts against Clemson in the Dabo Swinney era.

In total, Spiers recorded three punts of at least 50 yards, one shy of his career high of four set against Syracuse last year.

Clemson and NC State, whose last meeting was in Raleigh in 2019, played consecutive contests in the series in Raleigh for the first time since 1951 and 1956 (with no meetings across the 1952-55 seasons). The teams’ scheduled meeting in Clemson in 2020 was wiped out when the ACC schedule changed as a result of the COVID-19 pandemic. The teams had played every year since 1971 prior to 2020.

The defeat snapped Clemson’s 36-game winning streak against teams unranked in the AP Poll, the second-longest in school history. Clemson's most recent defeat at the hands of an unranked squad had come in 2017 at Syracuse. Clemson is now 110-13 against AP-unranked teams under Dabo Swinney.

The game was tied 7-7 at halftime. It was only Clemson’s ninth game under Dabo Swinney to be tied after two quarters.