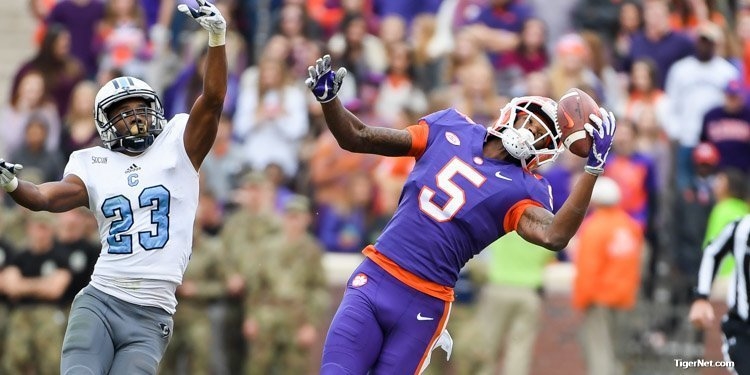 Clemson won on Military Appreciation Day for the 10th straight time, improving to 20-4 overall in such games.

Clemson improved to 52-2 in its last 54 games against unranked opponents.

Clemson won its 59th game in the past five years, which is the second-most of any program in that stretch.

Clemson won its 102nd game in the past 10 years, which is the fourth-most of any program in that stretch.

Clemson improved to 86-21 in the 2010s. That .804 winning percentage is the best of any decade in program history.

Clemson won its 54th straight game when holding the opposition to under 23 points, dating back to 2010.

Clemson defeated The Citadel for the 17th straight time.

Clemson improved to 32-0 all time versus FCS opponents, winning by double digits for the 31st time in such games.

Clemson earned its 10th win, marking the seventh straight season that the Tigers have won at least 10 games, and their 14th season overall that they have earned at least 10 wins. The streak of seven straight 10-win seasons is tied for the sixth-longest such streak in the nation.

With the win, the senior class also improved to 27-1 at home, with the 27 home wins serving as the most of any class in program history.

With the win, head coach Dabo Swinney reached the 10-win mark for the seventh time since becoming Clemson’s head coach, the most of any head coach in program history.

Swinney won his 99th game as a head coach, the fourth-most wins by an ACC coach in conference history. The 99-win mark also serves as the fifth-highest win total for any head coach in his first 10 years as a head coach.

Quarterback Kelly Bryant won his 10th game as a starter, tying a program record for the most wins earned by a first-year starting quarterback.

Wide receiver Deon Cain hauled in a reception for the 34th straight game, the 10th-longest active streak in the nation.

Wide receiver Hunter Renfrow hauled in a reception for the 25th straight game.

Wide receiver Hunter Renfrow scored his first touchdown of the season on a 12-yard reception in the first quarter.

Wide receiver Kanyon Tuttle hauled in his first career reception on a nine-yard catch, finishing with two receptions in the contest.

Kicker Christian Groomes made his first career field goal on a 38-yarder.