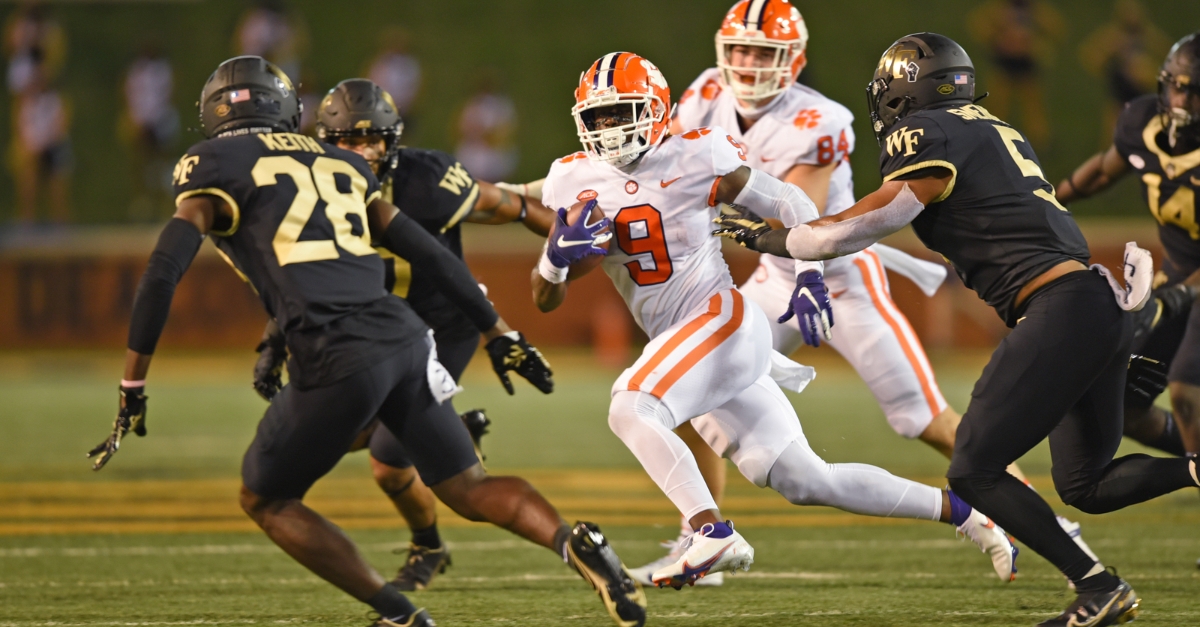 Clemson improved to 94-23-8 all-time in season-openers. Clemson has now won 29 of its last 36 openers, including an 11-1 mark in openers under Dabo Swinney and victories in each of its last six season debuts.

Clemson has now recorded a six-game road winning streak against a single opponent for the eighth time in school history. It is Clemson's first such streak since 1989-99, when Clemson won six straight against South Carolina in Columbia.

Clemson defeated its 23rd consecutive ACC opponent, including postseason play, dating to October 2017 against Georgia Tech, adding to the longest such streak in school history.

Head Coach Dabo Swinney improved to 12-0 as a head coach against Wake Forest. Wake Forest is one of five ACC schools against whom Swinney is undefeated as head coach, a list that also includes Duke (3-0), Louisville (6-0), Virginia (4-0) and Virginia Tech (5-0). Swinney is also 2-0 vs. temporary ACC member Notre Dame.

Though 2020 is technically being played sans divisions, Clemson defeated a traditional ACC Atlantic Division opponent for the 15th straight time and for the 35th time in 36 opportunities.

Clemson has now won 44 of its last 46 games against ACC teams.

Clemson has now won 79 of its last 81 games when leading at halftime.

Clemson improved to 101-2 since 2011 when leading after three quarters.

Clemson now has a 100-2 record when totaling more first downs than its opponent since 2011.

Clemson has now won 82 straight games when holding teams under 23 points (dates to 2010).

Clemson has now won 23 September games in a row.

Lawrence posted the first game of 350-plus passing yards and multiple rushing touchdowns by a Clemson player since Tajh Boyd against NC State in 2012.

Lawrence scored the game’s first touchdown on a two-yard touchdown run in the first quarter, his 11th career touchdown run. It marked the second straight year that Clemson’s opening score of the season came on a Lawrence touchdown run.

Lawrence has now rushed for a touchdown in three straight games, dating to last season, matching his career long streak set in the first three games of 2019.

Lawrence’s first touchdown run was the culmination of a nine-play, 92-yard drive. Clemson produced eight drives of 90 or more yards a season ago.

Lawrence’s passing touchdown was the 67th of his career, tying him with Thaddeus Lewis for 10th-most in ACC history.

Lawrence produced his eighth career 300-yard passing game, joining Tajh Boyd (18), Deshaun Watson (13) and Charlie Whitehurst (eight) as the only players in school history to record at least eight career 300-yard passing games. The 351 yards passing were the third-highest total of his career (395 vs. Syracuse in 2019; 393 vs. South Carolina in 2018).

Dating to last season, Lawrence has now thrown 267 consecutive passes without an interception. He passed Mitch Trubisky (243 from 2015-16) for the fourth-longest such streak in ACC history. He is three attempts short of tying Drew Weatherford (270 in 2007) for third on that list.

On a two-yard touchdown run in the third quarter, Etienne rushed for a touchdown in a 10th straight game, dating to last season, to move past Lester Brown (1978), Terry Allen (1988-89) and James Davis (2005-06) for sole possession of the longest such streak in school history.

Etienne has now scored a touchdown of any kind in 13 consecutive games, pulling within one game of the school record held by C.J. Spiller (14 straight games in 2009).

Etienne’s rushing touchdown was the 57th of his career, tying Florida’s Tim Tebow, Washington’s Myles Gaskin and San Diego State’s Marshall Faulk for the 15th-most by any FBS player according to official NCAA records that did not count postseason statistics until 2002.

With 149 all-purpose yards, Etienne (5,271) passed Sammy Watkins (5,129) for second on Clemson's career all-purpose yardage leaderboard. He now trails only C.J. Spiller, who holds the Clemson and ACC records at 7,588.

Tight end Braden Galloway finished the game with a career-high-tying 60 yards on a career-high five receptions. His career highs entering the game in each category were three receptions (vs. Furman in 2018) and 60 yards (vs. LSU last season).

Tight end J.C. Chalk scored his first career touchdown on a 12-yard pass from Lawrence in the second quarter.

Collectively, Clemson’s tight ends finished with seven receptions for 114 yards with a touchdown.

Defensive end K.J. Henry, a Winston-Salem native making his first career start, recorded Clemson’s first sack of the season on Wake Forest’s opening drive. It was the third sack of his career.

Fellow true freshman defensive lineman Myles Murphy earned his first career sack in the second quarter. Murphy finished with 2.0 sacks, the most by a Clemson true freshman since Dexter Lawrence against Virginia Tech in the 2016 ACC Championship.

Potter tied his career long with a 52-yard field goal to end the second quarter. Potter now has four career field goals of 50 yards or more, one shy of the career school record of five held by Chris Gardocki (1988-90) and Donald Igwebuike (1981-84).

With his third PAT, the 89th of his career on his 89th attempt, Potter broke Clemson's all-time record for consecutive extra points made (88 by Mark Buchholz from 2007-08).

Clemson finished the game with six sacks, its most in a season opener since a six-sack performance to open 2010.

Clemson outscored Wake Forest, 14-0, in the first quarter. Clemson has outscored opponents 191-34 in first quarters since the start of the 2019 season.

Clemson opened the season against an ACC opponent for only the 14th time since the conference’s founding in 1953. Clemson is now 11-2-1 against ACC opponents in Week 1 contests all-time.

Clemson opened the season against Wake Forest after opening against Georgia Tech last season, representing the first time Clemson opened with an ACC foe in back-to-back years since a five-season stretch of in-conference season openers across the 1965-69 seasons.

Clemson opened conference play on the road for the seventh time in eight years. Clemson has now won each of its last six conference openers since 2015, passing a five-year streak from 1980-84 for the longest conference-opener winning streak in school history.

Clemson opened a season on the road for the first time since 2016, when second-ranked Clemson defeated Auburn, 19-13, at Jordan-Hare Stadium to kick off an eventual national championship campaign.