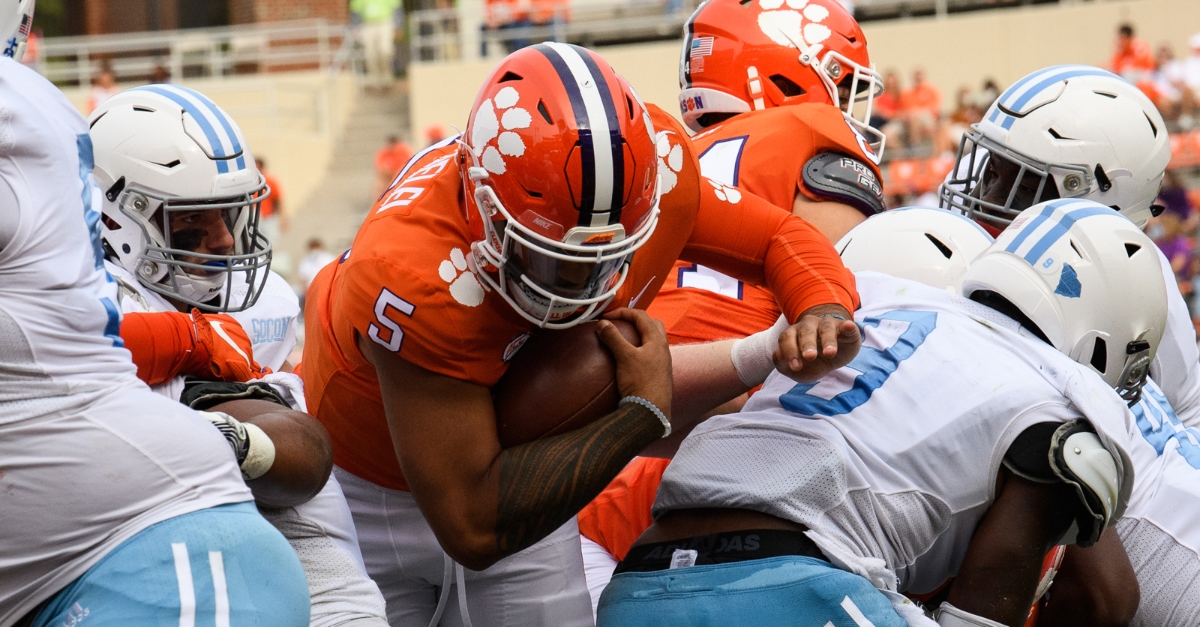 The shutout was Clemson’s seventh under Head Coach Dabo Swinney, and its fifth home shutout in his tenure.

The shutout was Clemson’s first in a home opener since 2000, a game also played against The Citadel (38-0).

Clemson, which allowed only 1.1 yards per carry last week, held The Citadel to 1.8 yards per carry, and has now held consecutive opponents 2.0 yards per carry or fewer for the first time since games 2-3 last season against Texas A&M and Syracuse.

Clemson recorded four sacks and has now recorded at least four sacks in four straight games, dating to last season, for the first time since games 8-11 in 2018.

Clemson rushed for 162 yards and has now rushed for at least 150 yards in 12 straight games, dating to last season. It represents Clemson's longest streak since a 15-game span across the 1991-92 seasons.

Lawrence’s third touchdown pass was the 70th of his career, moving him into a tie for sixth with Jacory Harris on the ACC's all-time career passing touchdowns leaderboard.

Lawrence has now thrown 276 consecutive passes without an interception, passing Drew Weatherford (270 in 2007) for the third-longest streak in ACC history.

Lawrence also scored his third rushing touchdown of the season, the 13th of his career, on a two-yard first quarter run.

Clemson opened the scoring on the game’s opening possession on a 17-yard touchdown pass from Lawrence to Ladson. The touchdown reception was Ladson’s fourth of his career and his first of the season.

Ladson added his second touchdown of the game on a 54-yard pass from Lawrence in the second quarter. The performance was Ladson’s first multi-touchdown game of his career.

Wide receiver Amari Rodgers recorded his first touchdown reception of the season — the ninth of his career — on a 44-yard touchdown pass from Lawrence.

Uiagalelei added his second rushing touchdown of the contest on a six-yard rush later in the second quarter. He became the first freshman quarterback at Clemson with two rushing touchdowns in a game since Kelly Bryant at Miami in 2015.

Linebacker James Skalski recorded his first career touchdown in his 49th career game on a 17-yard fumble return in the first quarter.

The fumble that led to the touchdown was forced by defensive end Myles Murphy. Murphy and fellow true freshman defensive lineman DeMonte Capehart tied for the team lead with 2.0 tackles for loss each.

Clemson jumped out to a 28-0 first quarter lead. The 28 first-quarter points tied for Clemson’s fourth-most in a quarter in school history, including most recently at NC State last season. Since the start of the 2019 season, Clemson has outscored opponents in the first quarter, 219-34.

Clemson scored 49 first-half points, its most in the first two quarters of play since scoring 49 against Temple in a 63-9 victory on Oct. 12, 2006. Previously, Clemson’s most first-half points in the Dabo Swinney era was 45 against Ball State in 2012 and against South Carolina State in 2016.

Clemson opened the game scoring a touchdown on each of its first seven drives (including a statistical “zero-play” drive on a fumble return for touchdown) for the first time in the Dabo Swinney era. The streak of consecutive drives with a touchdown was broken only by a drive that started deep in Clemson territory with 32 seconds remaining in the first half.

Clemson turned the ball over only once and has not produced multiple giveaways in a game in any of its last 10 games, dating to last year.

Clemson played its 120th home opener in school history in its 125th season, as there were five seasons in which Clemson did not play a game at home.

The game was Clemson’s latest home opener in a season (Sept. 19) since opening the 1985 season on Sept. 21 against Georgia.

The game was played 78 years to the date following Clemson’s first game at Memorial Stadium, as the Tigers opened the facility that would later become known colloquially as Death Valley with a 32-13 defeat of Presbyterian College on Sept. 19, 1942.

Clemson won its 17th straight home opener. Clemson has won every home opener since a 30-0 home opener loss to Georgia in 2003. It ties Clemson's longest winning streak in home openers all-time, set across the 1944-60 seasons.

Clemson improved to 33-5-1 in its all-time series with The Citadel since the teams' first meeting in 1909.

Clemson has now won its 18 most recent games in its all-time series with The Citadel since 1932, the third-longest winning streak against a single opponent in Clemson history (31 vs. Furman, 1938-Present; 29 vs. Virginia from 1955-89).

Clemson is now 35-0 against Football Championship Subdivision teams since the NCAA formed the division prior to the 1978 season.

Clemson has now won 80 of its last 82 games when leading at halftime.

Clemson improved to 102-2 since 2011 when leading after three quarters.

Clemson improved to 101-2 when totaling more first downs than its opponent since 2011.

Clemson has now won 83 straight games when holding teams under 23 points (dates to 2010).