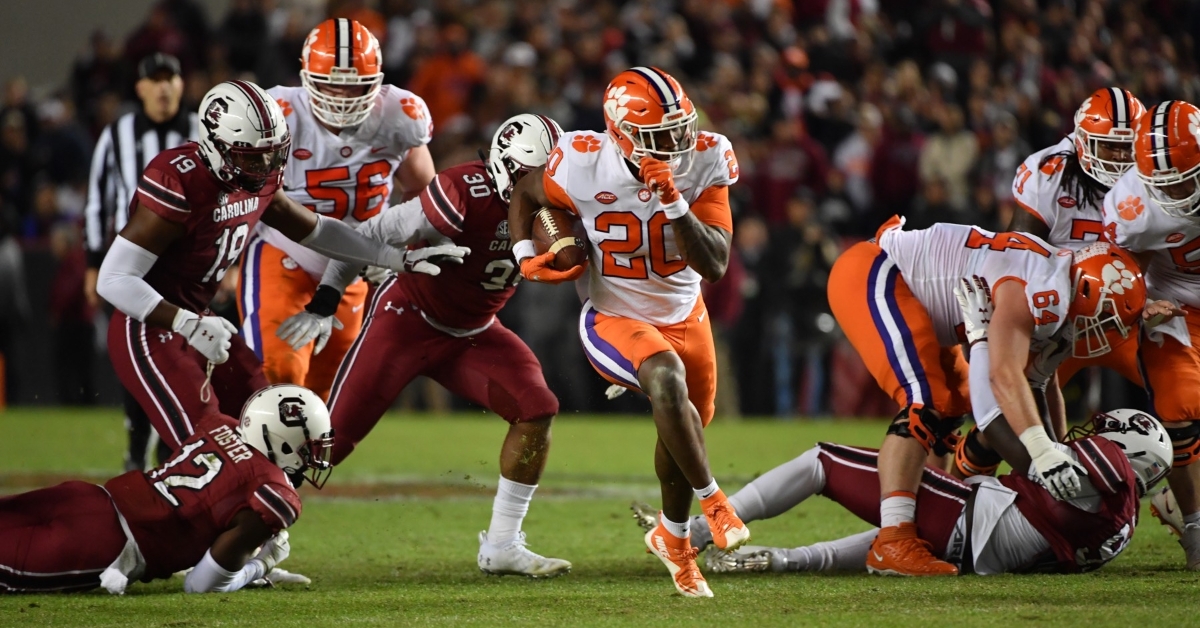 Clemson has now recorded seven consecutive wins against South Carolina for the first time since a seven-game streak from 1934-40, matching the longest winning streak in the series by either team all-time.

Clemson earned a fourth straight road win against South Carolina for the first time since defeating the Gamecocks on the road six straight times across the 1989-99 seasons.

Clemson improved to 13-5 against SEC opponents in the College Football Playoff era. Clemson is now 7-2 against SEC East foes since 2014 and 6-2 against the SEC West since the start of the 2016 season.

Clemson improved to 11-1 in its last 12 regular season games against SEC opponents, dating to 2014.

Clemson improved to 116-13 against AP-unranked teams under Dabo Swinney. The win made Clemson 93-3 against unranked teams since the start of the 2012 season.

Clemson improved to 76-6 in regular season play since the start of the 2015 season. All six of Clemson's regular season losses in that span have been decided by a final margin of 10 or fewer points.

Head Coach Dabo Swinney earned his 149th career win in his 14th season (including an interim stint in 2008) to tie Barry Switzer (149) for the third-most wins through the first 15 seasons of a coaching career in FBS history.

Clemson improved to 117-2 since 2011 when leading after three quarters.

Clemson now has a 115-2 record when totaling more first downs than its opponent since 2011.

Clemson and South Carolina resumed a rivalry that had been contested for 111 consecutive years prior to the COVID-19 pandemic in 2020. Before its interruption, it was the nation’s second-longest uninterrupted series.

By virtue of the 2020 interruption, Clemson played consecutive games at South Carolina in the series for the first time since 1959. Clemson played the first 57 games in the now-118-game series on the road on “Big Thursday” during the annual State Fair until the series transitioned to the home-and-home format in 1960.

The game was Clemson’s 23rd shutout of South Carolina all-time and its first since Danny Ford’s Tigers shut out South Carolina, 45-0, in 1989. All 23 of Clemson’s shutouts in the series have come in Columbia.

The shutout was Clemson’s eighth under Dabo Swinney and its first since a 49-0 shutout of The Citadel in 2020. It was Clemson’s second road shutout under Swinney, joining a 58-0 win at Miami (Fla.) in 2015.

Clemson recorded its fifth game without allowing an offensive touchdown this season to tie the 1981 and 1989 Tigers for the third-most in a season since 1954.

Clemson did not allow a first down until 18 minutes into the game. Clemson led 17-0 prior to surrendering a first down.

Clemson held South Carolina to 43 rushing yards and has now held three straight opponents below 100 rushing yards for the first time since 2018 against Florida State, Louisville and Boston College.

Clemson has also now held three straight opponents to 50 or fewer rushing yards for the first time since 1991 against Maryland, South Carolina and Duke.

Clemson’s three points allowed over its last two meetings with South Carolina are its fewest allowed in a two-game span against South Carolina since allowing only two points against the Gamecocks across the 1959 (27-0) and 1960 (12-2) games.

Clemson has now scored at least 30 points in five consecutive games for the first time since the first 11 games of the 2020 season.

Clemson rushed for 265 yards and improved to 72-1 when rushing for 200+ yards under Dabo Swinney.

Clemson has now reached 250 rushing yards in consecutive games for the first time since a four-game streak against Florida State, Louisville, Boston College and Wofford in 2019.

With a 6.2-yards-per-carry average in the game, Clemson has now averaged 6.0 or more yards per carry in consecutive games for the first time this season.

Clemson has now rushed for at least three touchdowns in three consecutive games for the first time since last season against Miami (Fla.), Georgia Tech and Syracuse.

Running back Will Shipley rushed 19 times for a career-high-tying 128 yards with a touchdown. He had previously rushed for 128 yards against Florida State on 25 carries earlier this season.

With his 10th rushing touchdown of the season, Shipley tied his position coach C.J. Spiller (10 in 2006) for second on the leaderboard for rushing touchdowns by a Clemson true freshman since 1972. He now trails only Travis Etienne (13 in 2017) in that category.

Shipley has now recorded back-to-back 100-yard rushing games for the first time in his career.

Shipley became the first Clemson freshman with back-to-back 100-yard rushing games since redshirt freshman Wayne Gallman against Syracuse and Wake Forest in 2014. He became the first true freshman to accomplish the feat since C.J. Spiller against NC State and South Carolina in 2006.

Shipley opened the scoring on a 29-yard touchdown run on Clemson’s opening drive.

Running back Kobe Pace rushed seven times for 58 yards with one touchdown.

Pace scored on a 34-yard touchdown run in the second quarter. It was his sixth rushing touchdown of the season and of his career.

Shipley and Pace combined for 186 rushing yards. Since both were held out against UConn as a precaution on Nov. 13, the duo has combined for 489 yards on 69 carries (7.1 avg.) in its last two games against Wake Forest and South Carolina.

With Shipley and Pace both reaching the end zone on the ground, Clemson has now had two different players both rush for a touchdown in consecutive games for the first time since Travis Etienne and Trevor Lawrence both scored via rush in the final two games of 2020 against Notre Dame and Ohio State.

Running back Phil Mafah added his third rushing touchdown of the season and of his career on a six-yard scoring run in the fourth quarter.

Wide receiver Will Brown caught a career-long 26-yard pass in the third quarter.

Booth became the first Clemson player with multiple interceptions in a game since Mario Goodrich (two) against Pittsburgh on Nov. 28, 2020.

Booth recorded Clemson’s first takeaway of the game, picking off a Jason Brown pass in the first quarter.

Booth became the first Clemson player with an interception in consecutive games since last season when Nolan Turner accomplished the feat against Georgia Tech and Syracuse.

Booth added his second interception in the second quarter, giving him his single-season career-high third of the season.

Booth joined Willie Underwood (two in 1980) as the only Clemson players to record two interceptions in a game against South Carolina.

Defensive end K.J. Henry recorded a sack and forced fumble in the fourth quarter. On the play, he tied his single-season career high with 3.5 sacks on the year and recorded the first forced fumble of his career.

Potter, who was 3-for-3 on field goals against Louisville and UConn and 2-for-2 against Wake Forest, has now kicked multiple field goals in four consecutive games for the first time in his career.

Potter is now 19-of-23 on field goal attempts this season, a single-season career high for field goals made and one field goal shy of entering the Top 10 in a single season in school history.

Potter has now converted his last 11 field goal attempts, the longest streak of his career. His previous career-long streak prior to the current streak was eight.

Spiers, Swinney and linebacker James Skalski each played in their 68th career games to extend their school record for most career games played.

Clemson has now held the lead in its all-time series with South Carolina for 44,935 consecutive days (123 years and 10 days). South Carolina won the series opener in 1896 before Clemson evened the series in 1897. Clemson won the third game in the series on Nov. 17, 1898 to take a 2-1 series lead that Clemson hasn’t relinquished.

Including the season opener against Georgia, Clemson played its second SEC opponent of the year and has now played multiple SEC opponents in the regular season 10 times in the last 12 years. The only years in that span in which Clemson did not face two SEC opponents were in 2015 and 2020, years in which Clemson was scheduled to play Notre Dame in non-conference play (and the latter of which was altered by the COVID-19 pandemic).