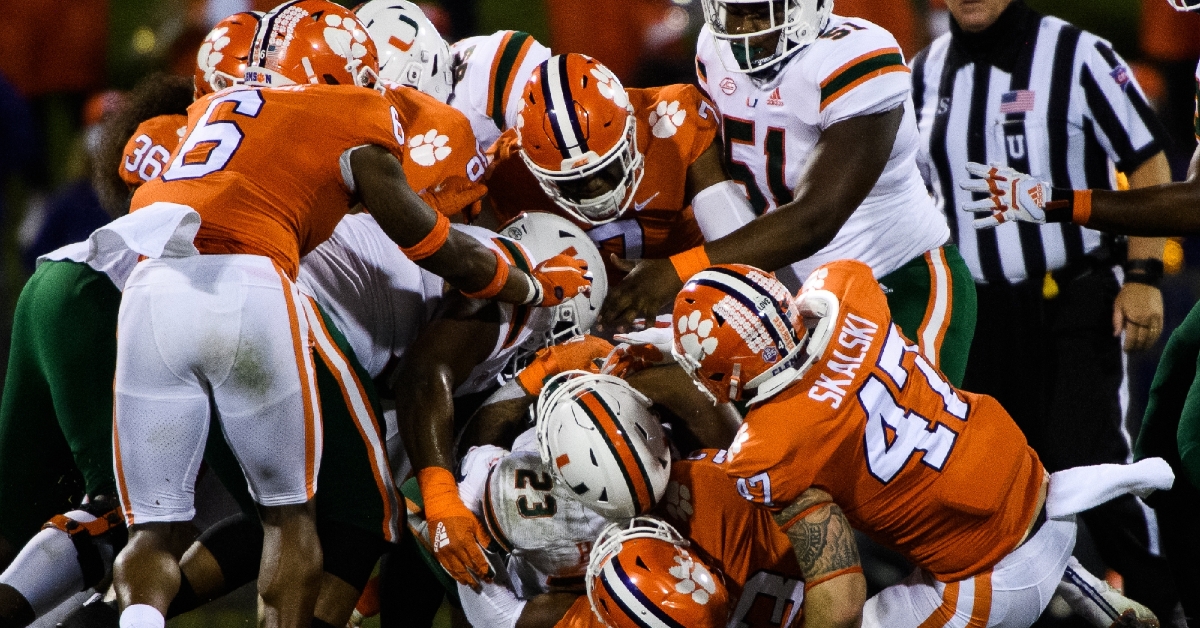 Clemson hosted its first matchup of AP Top 10 teams at Memorial Stadium since a classic 42-36 win against Louisville in 2016. Clemson improved to 13-9 all-time in games between AP Top 10 teams.

Clemson’s 25-point win was its sixth win of 25 or more points against an AP Top 10 opponent all-time.

Clemson hosted a team ranked in the AP Top 15 at Death Valley for the 10th time under Dabo Swinney. Clemson is now 7-3 in those contests, including wins in each of its last five such games since 2015.

Clemson played its 18th game all-time while ranked No. 1 in the AP Poll to move past Pitt and Tennessee for sole possession of the 15th-most since the poll's inception in 1936. It was Dabo Swinney's 17th game coached at No. 1, tying him with College Football Hall of Famer Ara Parseghian for 19th all-time.

Clemson has now defeated Miami by a combined score of 138-20 in the teams’ last three meetings.

Clemson allowed only nine first downs. It marks the sixth time in the Dabo Swinney era that Clemson has held an ACC opponent to fewer than 10 first downs. Postgame notes for Clemson-Miami

Clemson finished the game with five sacks and has now posted multiple sacks in 26 of its last 27 games, including each of its last 10.

Clemson has now recorded at least three sacks in six straight games, dating to last season, for the first time since a seven-game streak across games 8-14 of the 2018 season.

Clemson produced 292 passing yards and 258 rushing yards. It was Clemson’s 18th time reaching 200 yards in both categories since 2018, the most in the country.

Clemson scored 42 points and has now scored at least 37 points in each of its first four games for the first time since 2011.

Clemson improved to 41-1 under Dabo Swinney when it records three or more takeaways. Clemson is now also 42-1 under Swinney when finishing plus-two or better in the turnover margin.

Clemson played a 12th consecutive game without turning the ball over multiple times. Clemson's 12-game streak with one giveaway or fewer is the program's longest in the last 20 years.

Quarterback Trevor Lawrence completed 29-of-41 passes, both season highs, for 292 yards with three touchdown passes. He also rushed eight times for 34 yards with a rushing touchdown.

Lawrence has now thrown 355 consecutive passes without an interception, surpassing NC State's Ryan Finley (339 from 2016-17) for the second-longest streak in ACC history.

Lawrence finished with a pass efficiency rating of 154.7 and has exceeded a 150 passer rating in all four games this season.

Lawrence recorded his 17th career game with three or more passing touchdowns, passing Deshaun Watson for sole possession of the second-most such games in school history.

With 326 combined passing and rushing yards in the game, Lawrence (8,873) passed Woodrow Dantzler (8,798) for fourth on Clemson's all-time leaderboard for career total offense.

Lawrence completed his first nine passes, and including his completions on his final two pass attempts last week, completed 11 consecutive passes across two games. It was the second straight game against Miami that Clemson’s quarterback has gotten off to an efficient start, as in Clemson’s most recent game against Miami prior to Saturday in the 2017 ACC Championship Game, Clemson quarterback Kelly Bryant opened that game with 15 consecutive completions against the Hurricanes.

Running back Travis Etienne rushed 17 times for a season-high 149 yards with two rushing touchdowns and caught a career-high eight receptions for 73 yards. His eight receptions were one shy of the Clemson record by a running back (nine by Jamie Harper vs. Florida State in 2010).

With a two-yard rushing touchdown in the second quarter, Etienne now has at least one rushing or receiving touchdown in 39 of his 47 career games, breaking the FBS record for most career games scoring a touchdown held previously by Florida's Tim Tebow (38 games from 2006-09) and Louisiana Tech's Kenneth Dixon (38 from 2012-15).

Later in the game, Etienne passed North Carolina’s Amos Lawrence (4,391 from 1977-80) for third on the ACC’s all-time leaderboard for career rushing yards.

During the game, Etienne (402) became the seventh player (and first non-kicker) in ACC history to score 400 career points.

Etienne recorded 222 all-purpose yards. It was the fifth 200-yard all-purpose game of his career and his first since Nov. 2, 2019.

The multi-touchdown game by Galloway was the first by a Clemson tight end since Jordan Leggett scored twice against Virginia Tech in the 2016 ACC Championship Game.

Clemson opened the scoring on a 24-yard touchdown pass from Lawrence to tight end Galloway.

Galloway’s first touchdown came on a screen pass in which the offensive line delayed its release from the line of scrimmage, similar to a touchdown pass tight end Jordan Leggett scored in the teams’ last regular season meeting, a 58-0 Clemson win at Miami in 2015.

The first touchdown reception was Galloway’s first of the season and the second of his career. It was his first since his collegiate debut on Sept. 1, 2018 against Furman.

Tight end Davis Allen scored his first career touchdown on a 22-yard pass from Lawrence in the third quarter.

Between Galloway (two) and Allen (one), Clemson tight ends recorded three touchdown receptions in a single game for the first time under Dabo Swinney.

Clemson’s second possession was a 16-play, 89-yard march that culminated with a two-yard touchdown run by Etienne. The 16-play drive represented the most plays run by Clemson in a single drive since an 18-play drive at the end of the Sugar Bowl against Alabama to conclude the 2017 season.

Cornerback Sheridan Jones recorded the first interception of his career in the third quarter, picking off Miami quarterback D’Eriq King in the end zone. The interception was the first thrown by King this season.

Cornerback Derion Kendrick recorded his first interception of the season in the third quarter. It was the third of his career and his first since Nov. 30, 2019 against South Carolina.

Linebacker Jake Venables added his first sack of the season in the third quarter.

Punter Will Spiers averaged 52.7 yards on three punts, his first game with at least three punts and an average of 50 yards or more since 2017 against Louisville (51.8 on four punts).

Clemson and Miami met for the first time in regular season play since 2015, when Clemson handed Miami its worst loss in program history, a 58-0 road victory for the Tigers. Including postseason play, it was the first game between the two teams since Clemson’s 38-3 victory in the 2017 ACC Championship Game in Charlotte.

Clemson led at the half, 21-0, and posted a 21-3 edge in first downs in the first half. Clemson has now won 82 of its last 84 games when leading at halftime.

Clemson improved to 22-3 against AP Top 25 teams since 2015. At 22-3 in those games presently, Clemson's 88.0 percent winning percentage against AP-ranked opponents in that time frame is the best in the country.

Clemson evened its all-time series against Miami at 6-6.

Clemson won a third straight game against Miami for the first time in school history.

Clemson earned its first home victory against Miami in school history. Miami collected victories in the teams’ only two meetings in Death Valley to date, a three-overtime win in 2005 and a 30-21 win in 2010.

Though 2020 will technically be a divisionless season, Clemson improved to 30-8 against opponents historically from the ACC Coastal Division, including postseason play, under Head Coach Dabo Swinney. Clemson has now won 16 of its last 17 games against the Coastal Division since 2015.

Clemson pushed its streak of consecutive victories in games that would typically count as ACC interdivisional matchups to 12 games, dating back to the 2016 ACC Championship Game.

Clemson won its 25th consecutive game against an ACC opponent, including postseason play. The 25-game winning streak against conference opponents moves Clemson past the 1998-2001 Florida State Seminoles for sole possession of the third-longest streak in conference history.

Clemson won its 25th consecutive home game to extend its school record for the longest home winning streak in school history. Of the 119 players on Clemson's 2020 roster, 110 have never experienced a home loss in their Clemson careers. Nine fifth-year seniors on Clemson's 2020 roster were on the 2016 team that recovered from a home loss to Pitt by winning the national championship that season.

Clemson (25 straight wins) tied the school record for longest home unbeaten streak. Clemson was unbeaten in 25 straight games at Memorial Stadium from 1980-84, posting 23 wins and two ties under Danny Ford in that span.

Clemson has now won 33 consecutive regular season games, the longest such streak in ACC annals and the second-longest in the FBS since 2005. Clemson's last regular season loss came in October 2017 at Syracuse.

Head Coach Dabo Swinney secured his 134th career win as a head coach to tie Virginia's George Welsh for the second-most career wins by an ACC head coach. At the time of his retirement following the 2000 season, Welsh was the winningest head coach in ACC history prior to being passed by Bobby Bowden.

Swinney moved his career winning percentage to .812 to move past Lafayette and Pitt's Jock Sutherland in the NCAA FBS record book for 11th all-time for coaches with at least 10 years of head coaching experience.

Clemson improved to 16-2 all-time when ranked No. 1 by the Associated Press. Clemson has never lost a regular season game as the nation's top-ranked team.

Clemson now has a 102-2 record when totaling more first downs than its opponent since 2011.

Clemson improved to 66-1 when rushing for 200+ yards under Dabo Swinney.

Clemson is now 52-0 when both passing and rushing for 200+ yards under Dabo Swinney.

Clemson now has a 60-3 record when winning the turnover margin since 2011.

Clemson has now won 84 straight games when holding teams under 23 points (dates to 2010).