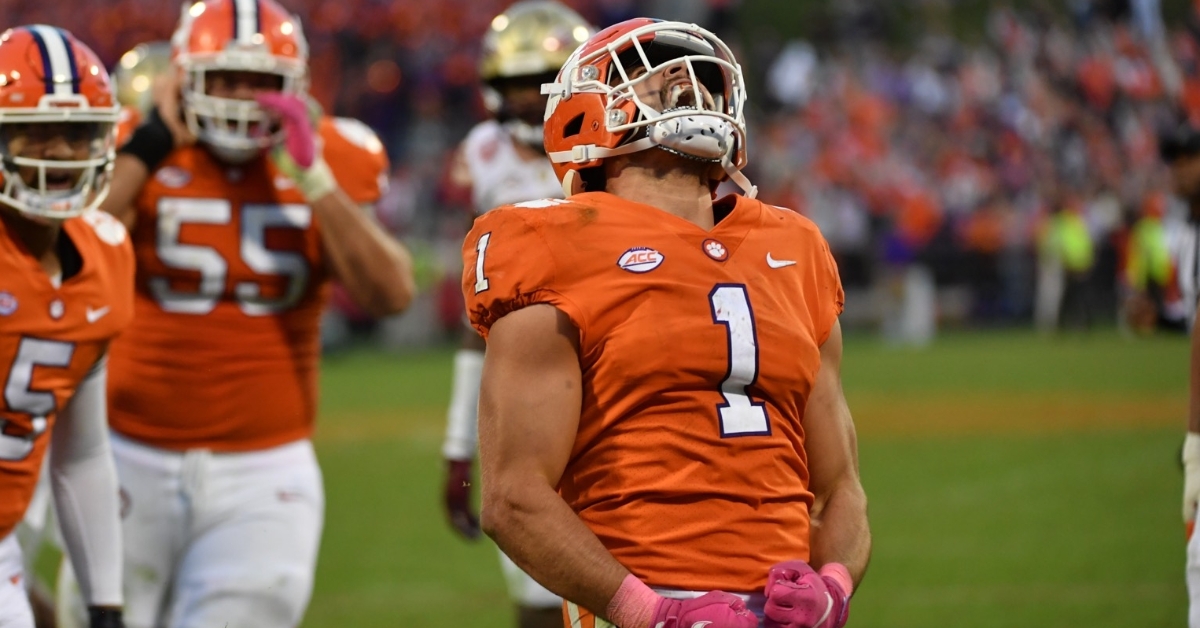 Clemson won its 32nd consecutive home game to extend its school record for both the longest home winning streak and longest home unbeaten streak in school history (as well as extend the nation’s longest active home winning streak). Of the 132 players on Clemson’s 2021 roster, 127 have never experienced a home loss in their Clemson careers. Five sixth-year “super seniors” on Clemson’s 2021 roster were on the 2016 team that recovered from a home loss to Pitt by winning the national championship that season.

Clemson improved to 29-7 in games following a loss under Dabo Swinney, including season openers following a loss in the previous season finale. Clemson has not lost back-to-back games in the same season since November 2011.

Clemson, which was already the first school to defeat Florida State in ACC play in five consecutive games, pushed that ACC-first winning streak against the Seminoles to six straight games. (Note: Miami previously defeated Florida State in six straight games from 2000-04, including a bowl game, but only the final game of that streak came during Miami’s ACC membership.)

Clemson improved to 9-8 against the Seminoles in Death Valley all-time to give Clemson the advantage in its all-time home record against Florida State for the first time in series history.

Clemson earned its fourth straight home win against the Seminoles and earned its 10th win in 11 home games against Florida State since 2003.

Clemson defeated an ACC Atlantic Division opponent for the 40th time in its last 42 opportunities. Those figures include games against traditional Atlantic opponents in a divisionless season in 2020.

Clemson improved to 113-13 against AP-unranked teams under Dabo Swinney. The win made Clemson 90-3 against unranked teams since the start of the 2012 season.

Swinney earned his 145th career win in his 14th season (including an interim stint in 2008) to tie Mark Richt (145) for fifth-most wins through the first 15 seasons of a coaching career in FBS history.

Clemson improved to 29-2 in October games in the College Football Playoff era (since 2014).

Clemson improved to 56-5 against ACC opponents (including postseason play) since the start of the 2015 season.

Clemson improved to 72-6 in regular season play since the start of the 2015 season. All six of Clemson's regular season losses in that span have been decided by a final margin of 10 or fewer points.

Though Clemson would later trail in the fourth quarter, Clemson led 17-13 after a scoreless third quarter and is now 114-2 since 2011 when leading after three quarters.

Clemson recorded 22 first downs to Florida State’s 11 and now has a 111-2 record when totaling more first downs than its opponent since 2011.

Clemson’s 188 rushing yards were its third-most of the season. Clemson has now exceeded 150 rushing yards in back-to-back games for the first time since games against Virginia Tech and Notre Dame last December.

Clemson has rushed for a touchdown in seven straight games and has rushed for multiple scores in back-to-back games for the second time this season (vs. South Carolina State and Georgia Tech).

Clemson scored 30 points in the contest, its second performance of 30 or more points this season and its most against an FBS opponent.

Quarterback DJ Uiagalelei completed 19-of-31 passes for 189 yards with one touchdown and one interception.

Running back Will Shipley rushed for 128 rushing yards on 25 carries, both career highs, with a career-high-tying two rushing touchdowns.

Shipley recorded the first 100-yard rushing performance by a Clemson true freshman since Nov. 3, 2018, when Lyn-J Dixon had 116 yards on four carries against Louisville.

Shipley’s 128 rushing yards were the most by a Clemson player since Travis Etienne’s 149 against Miami (Fla) last October.

Shipley’s 25 carries were the most by a Clemson player since Etienne’s 28 carries against South Carolina in 2018. Shipley was not tackled for a loss on any of his 25 carries, gaining positive yardage on 22 carries and getting back to the line of scrimmage on the other three carries.

Shipley pushed his rushing touchdown total on the season to seven, passing Chuck McSwain (six in 1979) for fifth-most by a Clemson true freshman in school history.

Clemson opened the scoring on a season-long 47-yard field goal from B.T. Potter.

Clemson has scored first in each of its last seven games. The lone game this season in which Clemson did not score first was the season opener against Georgia.

Running back Phil Mafah recorded a career-long 63-yard run in the second quarter. It was Clemson’s longest play of the season, surpassing a 59-yard rush by Kobe Pace against Boston College. It was the longest Clemson rush since Travis Etienne’s 72-yard touchdown run against Miami on Oct. 10, 2020.

Mafah finished the game with a career-high 69 yards, surpassing his 58 against Boston College.

Tight end Davis Allen recorded his first touchdown of the season on an 11-yard pass from Uiagalelei in the second quarter.

The receiving touchdown was the fifth of Allen’s career and his first since Nov. 7, 2020 at Notre Dame.

Shipley, who returned last week from a leg injury suffered in late September at NC State, scored on a two-yard run with 3:41 remaining in the second quarter. It was his first touchdown since that contest at NC State.

Shipley scored his second touchdown of the game on a 21-yard touchdown run with 2:53 remaining to give Clemson the lead.

Wide receiver Justyn Ross gained a season-high 85 yards on a team-high six receptions. His 85 yards were his most since the 2019 ACC Championship Game, when he recorded 94 yards against Virginia.

With the six receptions, Ross (151) passed Perry Tuttle (150) for 11th on Clemson's leaderboard for career receptions.

Tight end Jake Briningstool recorded his first career reception on an 11-yard pass from Uiagalelei in the second quarter.

Safety Andrew Mukuba recorded Clemson’s first takeaway of the game in the fourth quarter, recovering a fumble by Florida State’s Treshaun Ward. It was the first fumble recovery of Mukuba’s career.

Clemson recorded a takeaway for a ninth consecutive game, dating to last season, for the first time since in 2019.

Defensive end Myles Murphy recorded a career-high 2.5 sacks, surpassing his 2.0 sacks in his first career game at Wake Forest in 2020.

Linebacker Trenton Simpson added a sack and has now recorded a sack in back-to-back games for the first time in his career.

Defensive end Xavier Thomas recorded a sack to give him a single-season career-high 4.5 sacks on the year.

Clemson recorded a fourth-down stop on fourth-and-1 on Florida State’s first drive of the second half. Clemson had entered the game tied for 105th in the FBS in fourth-down defense, as opponents were 6-for-9 on the year.

Murphy recorded a blocked PAT on Florida State’s first attempt in the first quarter. It was Clemson’s first blocked kick of the season and the first of Murphy’s career.

Spiers, Swinney and linebacker James Skalski each playing in their 64th career games to extend their school record for most career games played.

Clemson’s final PAT of the game was the 500th placekicking point for which Swinney has held in his career.