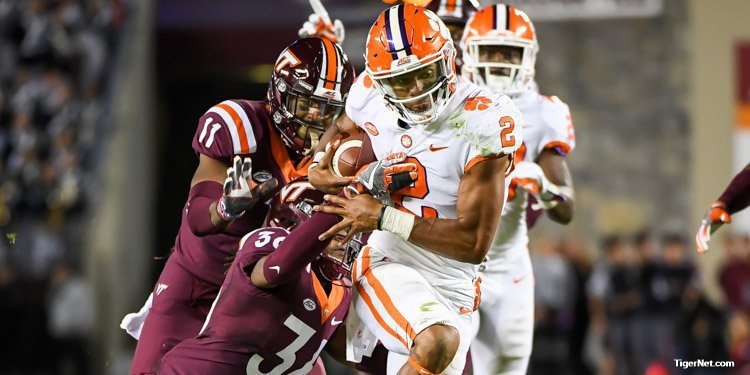 A mark of Clemson’s resume-building start has been – despite notching three top-25 wins in five September games – how much the Tigers have gone deep into (and sometimes even off) the depth chart.

While they didn’t quite get to 70-of-72 on the travel roster playing like at Louisville, every healthy player on the two-deep saw the field in some fashion outside of third-string QB Hunter Johnson, and only five of the scholarship contributors played only on special teams.

* Junior linebacker J.D. Davis’ production per play was something we noted here earlier in the season, and he only showcased his skill more with a career-high 36 snaps. Davis posted 11 tackles Saturday at Virginia Tech to up his snap-to-tackle ratio to 3.9. For reference, fellow weakside linebacker Kendall Joseph averages a more typical stop-every-7.3 plays for the volume of snaps, and fellow LB starter Tre Lamar, 8.6. Dorian O’Daniel leads the first group with a 6.1 average and also paces the linebackers in his percentage of solo hits (69).

* Over the last four games, Kelly Bryant has averaged 19.5 rushes for 71.3 yards and 1.5 touchdowns. After playing more snaps each of the previous three games, a more dynamic offense on the other side dropped his play-count from 80 to 63 snaps from BC to Virginia Tech.

* Clemson’s receiver plays distribution was even from the second-to-third levels against Virginia Tech, with those six receivers averaging 10 plays. None of that group registered a catch, with sophomore Diondre Overton having the best chance on a pass that was broken up. Freshman Amari Rodgers was motioned into the backfield for a seven-yard loss on a handoff.

* Dabo Swinney addressed Deon Cain’s lower-than-expected production on his radio show Monday, chalking it up to a combination of missed opportunities and how defenses are covering him. Through five games, Cain has played 225 snaps and ranks third on the team with 13 catches for 206 yards and a touchdown. Through five games at this point last season, future first-round pick Mike Williams had played 218 snaps at the same position with 25 catches for 373 yards and two touchdowns. A shift to a more run-based offense explains the difference to a certain extent, and also the ‘2’ receiver production with McCloud is ahead of Artavis Scott at this point last year (253 yards versus 183).

* The offensive line saw a shift at right tackle with Sean Pollard starting his first game this season and playing the majority of the snaps (37), a week after Tremayne Anchrum played 52 and Pollard, 28, versus Boston College (Anchrum played 29 against Virginia Tech).

* Junior cornerback Mark Fields tallied a career-best six tackles in a career-high 71 snaps due to Clemson’s secondary being down a couple of contributors in Trayvon Mullen (held out after being out of concussion protocol) and Marcus Edmond (midfoot sprain).