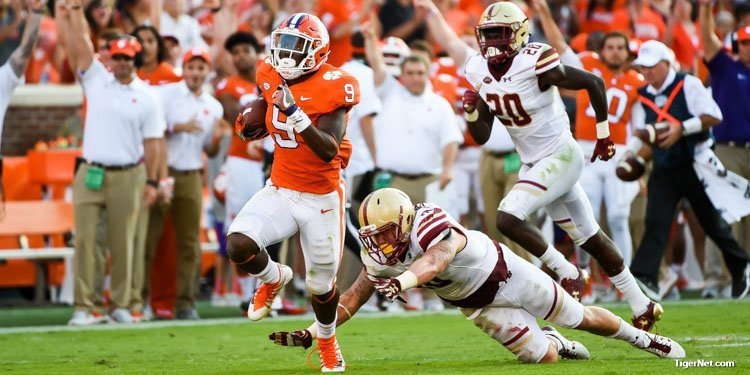 Freshman running back Travis Etienne is averaging over eight yards for every snap he's on the field.

The Clemson-Boston College game didn’t go to script in terms of ease of win, but the 27-unanswered points in the fourth quarter did give a window in gaining experience in ACC action.

On offense, nine receivers totaled at least 10 plays and eight offensive linemen saw at least 28 snaps. The defensive rotation was a little tighter, but in some cases by injury, they got into the third and fourth-string at positions as well.

* Averaging 12.7 yards per carry over three games is impressive enough, but with 23 rush attempts in 35 plays, Clemson freshman running back Travis Etienne has gained 8.3 yards for every snap he’s been on the field. Against Power 5 teams, that bumps up to 10.6 yards per snap.

* Kelly Bryant has been spelled for a few series, but over the last three games, he’s averaged 20 rushes in increasing snaps each game – 64 versus Auburn, 74 versus Louisville and 80 versus Boston College.

* Tremayne Anchrum and Sean Pollard played a similar ratio of snaps at right tackle as the ACC opener at Louisville, with Anchrum logging 52 (53 last week) and Pollard 28 (26 last week). In a game where 11 linemen played in all, sophomore guard John Simpson went from 18 snaps at Louisville to 33 against Boston College.

* Logan Rudolph being out for the season (14 snaps at Louisville) distributed more defensive end plays to junior Chris Register (8 at Louisville to 13) and true freshman Justin Foster (2 to 5). Neither one got on the board statistically versus BC.

* Moving to cornerback this week, sophomore DB K’Von Wallace’s snaps will likely go up after averaging 14 with two tackles the last two weeks (11 with zero stops against BC; played 70 snaps versus Auburn in week two with four tackles). Trayvon Mullen (in concussion protocol this week) has totaled seven tackles per game with one interception in 86 ACC snaps this season.