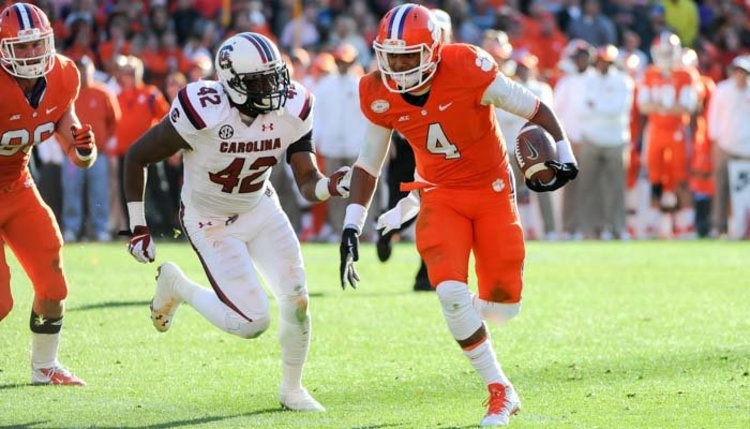 Deshaun Watson playing on a torn ACL to break South Carolina's streak in 2014 is one of the more memorable recent rivalry performances.

• This will be meeting No. 115 between Clemson and South Carolina and the 109th consecutive year the two schools have met. That is the second longest active streak of consecutive years played in a rivalry in the nation. The only rivalry longer is Minnesota vs. Wisconsin at 110 games. Those two teams also play on November 25.

• The Clemson vs. South Carolina series dates to 1896 and the first year of football at Clemson, the fourth season for South Carolina. Clemson holds the advantage 68-42- 4 since that first meeting in Columbia, a game won by South Carolina, 12-6. Clemson’s first win took place the following year, an 18-6 victory in Columbia.

• Clemson broke a five-game losing streak to South Carolina in 2014 with a 35-17 win at Clemson. Deshaun Watson led the Tigers to the victory with 269 yards passing and 13 yards rushing. Playing with a torn ACL, he threw for two scores and rushed for two. The Tigers have won two more since then and have a three-game winning streak in the series entering Saturday’s night’s game.

Unusual Facts about the Clemson vs. South Carolina Series

* Josh Cody, who was inducted into the Clemson Hall of Fame this year, had a 4-0 record for Clemson against South Carolina between 1927-30. He is the only coach in the series to have a perfect record, given a minimum of three games coached.

* Paul Williams is the last player to letter for both schools. He lettered for Clemson in 1978 and for South Carolina in 1980.

* A Clemson captain actually played for South Carolina. Cary Cox lettered for the Gamecocks in 1943. After the war, he enrolled at Clemson and served as captain for the Tigers in 1947. Cox died in 2008.

* In 1948 and 1981 a blocked punt returned for a touchdown proved to be the pivotal play in a Clemson victory, victories that allowed Clemson to go on to an undefeated season. In both instances, the original line of scrimmage was the South Carolina 28-yard-line.

* Willie Underwood had two interceptions to lead Clemson to victory over South Carolina in 1980. A starter for four years, the strong safety never had recorded an interception in any of his first 46 games as a Tiger, then had two against the Gamecocks in his 47th and final game. One of the thefts was a 37-yard return for a touchdown, the only touchdown of his career.

* In a placekicking career that spanned five years, Bob Paulling made 107 of 109 extra points. Both of his misses were at South Carolina, one in 1981 and one in 1983. He had a streak of 70 consecutive made extra points (second longest in Clemson history) in between the two miscues.

1948 Phil Prince blocked a punt and Oscar Thompson returned the ball for a touchdown that gave Clemson a 13-7 win in Columbia and allowed Clemson to keep an undefeated season. The play took place with 4:15 left in the game.

1959 Harvey White connected with future Super Bowl Champion Bill Mathis for a 26-yard touchdown pass in the third period to put Clemson up 19-0 in the final Big Thursday game in Columbia. White completed 9-10 passes on the day and led the Tigers to the 27-0 victory.

1962 Don Chuy and Billy Weaver combined to sack Dan Reeves for a 13-yard loss on fourth down with just 33 seconds left, preserving Clemson’s 20-17 victory. South Carolina had driven to the Clemson 25 for that last play.

1966 Harry Olszewski, an All-America offensive guard, picked off a fumbled snap in mid-air and ran 12-yards for a touchdown. The 35- 10 victory allowed Clemson to win the ACC title. No Clemson offensive lineman has scored a touchdown in a game in Death Valley since. Saturday will be the 50-year anniversary of that play.

1967 Buddy Gore’s 43-yard run in the third period led to a Tiger touchdown, and was a momentum swaying play in Clemson’s victory over the Gamecocks, a win that allowed Clemson to clinch a tie for the ACC championship. That was the key run on this day that saw Gore become the first Clemson back in history to go over 1000 yards in a season and break Brian Piccolo’s ACC single season rushing record.

1971 Eddie Seigler kicked a 52-yard field goal to lead Clemson to a 17-7 win over the Gamecocks. It was the first field goal of at least 50 yards in Clemson history.

1972 With Clemson leading 7-6 in the fourth period, Jimmy Williamson batted down a Dobby Grossman two-point conversion pass to preserve the victory for the Tigers.

1977 Jerry Butler made a 20-yard touchdown catch of a Steve Fuller pass with 49 seconds left to give Clemson a 31-27 win in Columbia. It clinched a Gator Bowl bid for the Tigers, Clemson’s first bowl bid in 18 years.

1980 Willie Underwood had a 37-yard interception return for a touchdown that clinched Clemson’s upset of South Carolina and Heisman Trophy winner George Rogers in 1980. Underwood was named Sports Illustrated Player of the Week for his performance in that game.

1988 Rodney Williams, a native of Columbia, led Clemson to a 29-10 victory in his final game at Death Valley. Clemson’s winningest starting quarterback in history threw for 192 and rushed for 38 and scored a touchdown.

1990 Chris Gardocki made his final punt in Death Valley memorable when he had a 78-yard boot in the fourth quarter to give South Carolina bad field position and clinch Clemson’s 24-15 victory over the Gamecocks. It remains the third longest punt in Clemson history.

2007 Mark Buchholz kicked a 35-yard field goal on the last play of the game, to give Clemson a 23-21 victory in Columbia.

2016 Mike Williams caught three touchdown passes in the first half of this game and one he carried a South Carolina defensive back the final nine yards into the endzone.

Clemson’s most significant wins in the South Carolina Series

1928 32-0 Clemson wins battle of unbeaten teams. Both teams were 5-0 entering the game. Clemson went on to an 8-3 record, a season mark for wins in a season at the time.

1939 27-0 Banks McFadden leads Clemson to victory, important win in 9-1 season that ended with win over Boston College in the Cotton Bowl

1960 12-2 Clemson wins first game between the two schools in Clemson.

2000 16-14 Clemson wins battle of top 25 teams thanks to Rod Gardner’s 50-yard reception from Woody Dantzler in final seconds, and a 25-yard field goal by Aaron Hunt with three seconds left.

2008 31-14 Dabo Swinney defeated South Carolina in his last game as interim head coach, a victory that assured him of retaining the position in a full time capacity.

2014 35-17 Clemson ended a five-year drought in the series with a 35-17 victory at Clemson. Deshaun Watson played with a torn ACL, but accounted for four touchdowns. Freshman Wayne Gallman rushed for 191 yards, the second most in Clemson history against the Gamecocks, and freshman Artavis Scott had had 7 receptions for 185 yards, the most receiving yards in history by a Clemson player against the Gamecocks.

Marcus Edmond (CB) – Had two tackles and one pass breakup in 30 plays in 2016 game at Clemson.

Dexter Lawrence (DT) – Had five tackles, including one sack, in 21 plays in 2016 game at Clemson.

Adam Choice (RB) – Had four carries for eight yards in 2016 game at Clemson.

Deon Cain (WR) – Had two catches for 38 yards in 2016 game at Clemson. Had five catches in 96 plays and one receiving touchdown in 2015 game at South Carolina.

The rivalry and the record books

We always hear the phrase, “You can throw out the record books when these two teams get together.” While there have been some upsets in this series, usually the team with the better record comes away with the victory.