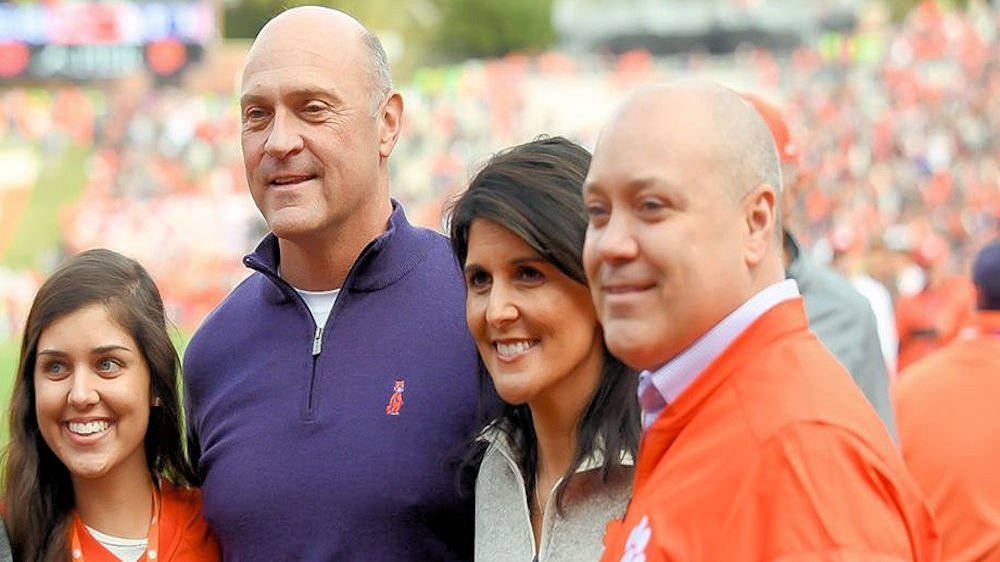 Former United States Permanent Representative to the United Nations and Governor of South Carolina Nikki R. Haley has been named to the Clemson Board of Trustees, effective immediately.

Haley graduated with a bachelor’s degree in accounting from Clemson in 1994. After leaving Clemson, she worked for her family business and served as its chief financial officer.

Haley’s distinguished career in public service began in 2004 with her election to the South Carolina House of Representatives. In 2010, Haley was elected as the first female and first minority Governor of South Carolina and was the youngest governor in the country at that time. She was reelected as Governor in 2014.

Under Governor Haley’s leadership, South Carolina was a leader in economic development and her administration announced new jobs in every county in the state during her tenure. Governor Haley also ushered in significant education reform, which sought to make funding more equitable and equip classrooms with the latest technology.

In 2016, then President-elect Donald Trump nominated Haley to be the twenty-ninth U.S. Permanent Representative to the United Nations. Haley continued to serve as Governor of South Carolina until her confirmation by the U.S. Senate in January 2017. Haley served as the U.S. Ambassador to the United Nations until January 2019. During that time, she was also a member of the President’s Cabinet and the National Security Council.

At the United Nations, Ambassador Haley worked to introduce reforms to make the organization more efficient, transparent, and accountable. Ambassador Haley was also a champion of human rights and challenged human rights violators. In the U.N. Security Council, she sought to defend America’s interests and safety. Those efforts included spearheading negotiations resulting in the strongest set of sanctions ever placed on North Korea for its nuclear weapons program.

Since 2019, Haley has led the Stand for America advocacy group, which seeks to promote public policies that strengthen America’s economy, culture, and national security.

Born in Bamberg, South Carolina, she is the daughter of Indian immigrants. Haley and her husband, Michael, a combat veteran who deployed to Afghanistan, have two children and reside in Kiawah Island, S.C.

“Ambassador Haley’s love of country, leadership skills, commitment to education, and passion for Clemson University will serve the Board well. She will be a tireless advocate for the University and all of its constituents,” said Kim Wilkerson, Chair of the Board of Trustees.

Haley succeeds David H. Wilkins of Greenville, who is retiring as a Trustee after serving since 2007, including six years as Chair. Wilkins will become a Trustee Emeritus.

Wilkins graduated with honors from Clemson in 1968 and was a starter on the tennis team from 1966-68. Wilkins earned his law degree from the University of South Carolina School of Law in 1971 and served as a first lieutenant in the United States Army and the U.S. Army Reserves.

Wilkins began his political career in 1981 as a member of the South Carolina House of Representatives. He served as a Representative for 25 years, including 11 years as Speaker of the House.

In June 2005, he was sworn in as the United States Ambassador to Canada and served in that position until January 2009. Since 2009, Wilkins has chaired the Public Policy and International Law practice group at Nelson Mullins Riley & Scarborough, LLP.

Haley was selected to fill the seat vacated by Wilkins according to terms established in the will of Thomas Green Clemson.