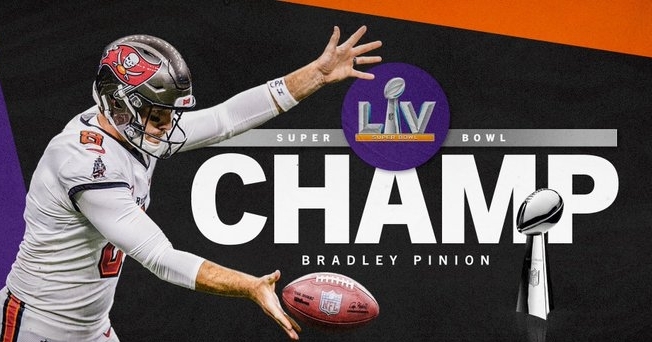 Super Bowl champion Tampa Bay Buccaneer and former Clemson punter Bradley Pinion was back in the Upstate this week to donate hundreds of socks and shoes to an Anderson community.

Pinion and his wife Kaeleigh partnered with Anderson Interfaith Ministries (AIM) for the giveaway according to WSPA.

Pinion was on hand Friday to help distribute a portion of the 400 pairs of shoes they had to give out, along with an AIM program called Summer Food for Kids, per WSPA.

"So this is an area that my wife grew up in. She’s from Pickens County, so right around the corner, and the whole Anderson, Pickens, Oconee, Clemson area has honestly given so much to me throughout my career, when I played at Clemson and so much support, that I just felt God calling on my heart to give back to this whole entire area,” Pinion told WSPA. “Really just showing God’s light, is what me and my wife want to do. We’re huge Christians and we love sharing that God loves everybody, no matter your circumstance, no matter your situation, no matter where you came from."

Pinion and the Bucs are coming off of a Super Bowl-winning season. He is going into his seventh NFL season and a third year with Tampa, after being named second-team All-Pro last season by Pro Football Focus.