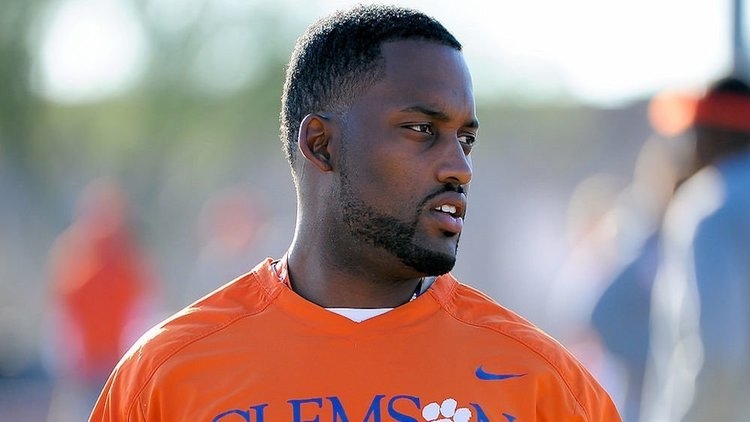 Wright had 200 career tackles at Clemson

"When I started the process to fill this position, Corico Wright was a name that kept coming up from people that I trust and respect," said Hendrix on Monday. "His combination of being an outstanding player and experience with winning programs, both as a player and as a coach, was hard to match. Also, his connections to some of our best recruiting areas made him a great choice to be our new safeties coach."

In his lone season at James Madison he coached Dukes consensus All-America cornerback Jimmy Moreland, who returned three of his five interceptions for touchdowns and finished sixth in the last year's Buck Buchanan Award, given annually to the top defender in the Football Championship Subdivision (FCS).

Wright went to JMU following two seasons at Murray State, where he coached the cornerbacks and also assisted with special teams.

During his time with the Racers, he guided D'Montre Wade to a pair of All-Ohio Valley Conference honors, as well as second team All-America accolades in 2017. The All-America nod came after Wade led the OVC with six interceptions.

Prior to Murray State, Wright spent three seasons at his alma mater, Clemson, where he was a defensive graduate assistant on Dabo Swinney's staff. Wright worked with the secondary under defensive backs coach Mike Reed and was in charge of the defensive game plans and breakdowns while also assisting in the daily operations of the defense.

As a player for the Tigers from 2009-12, he tallied 200 career tackles, to go with 17.0 tackles for-loss, 5.0 sacks, 11 quarterback hurries, two pass breakups, and one fumble recovery in his 52-game career (26 starts). He was an Atlantic Coast Conference (ACC) Academic Honor Roll member and was twice Clemson's third-leading tackler, accounting for more than 150 stops between his sophomore and junior seasons.

As a player and coach at Clemson, Wright was part of eight bowl games and five bowl victories. He helped the Tigers win the 2009 Music City Bowl and 2012 Chick-fil-A Bowl as a student-athlete, and he also took part in the Orange Bowl and Meineke Car Care Bowl. During his coaching tenure with the Tigers, the program captured a pair of Orange Bowls and the Russell Athletic Bowl while also reaching the College Football Playoff National Championship against Alabama in his final season at Clemson.

Wright served as a Bill Walsh Minority Intern with the New York Jets in 2014.