Bowers returns to Tampa where he was a second round NFL Draft pick of the Tampa Bay Buccaneers in 2011 and played five seasons for the Bucs. Bowers ended his professional career following the 2017 season and returned to Clemson in 2018 where he completed his degree and worked with the Tigers' defensive lineman as an undergraduate coach. 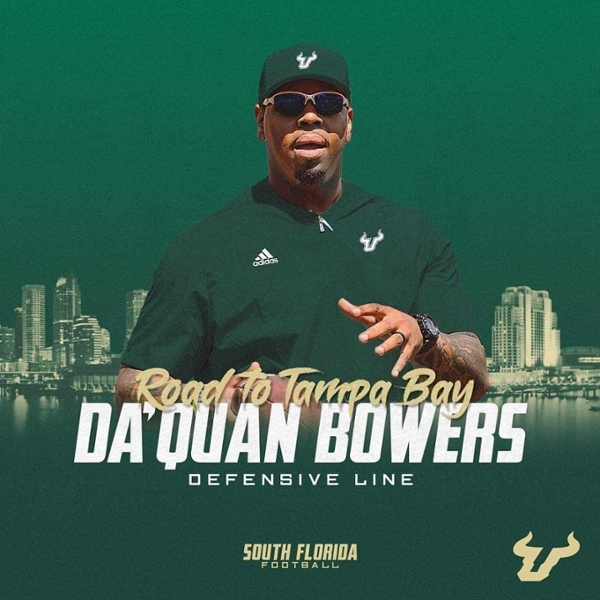 "Da'Quan was an absolutely dominant player for us at Clemson and I am excited that he will bring that experience and his professional playing experience to coaching our players at USF," Scott said. "Da'Quan has been doing great work with our defensive line the last two years at Clemson and is ready to excel in his first full-time coaching opportunity."

Working with defensive line coach Todd Bates at Clemson, Bowers mentored three defensive ends selected in the NFL Draft and was part of Tigers teams that won two ACC Championships, made two College Football Playoff appearances and won the 2018 CFP National Championship. In his role, he provided analysis of game film and statistical reports, contributed to the game plan and game management of the passing defense, and coached pass rush specialists.

Bowers earned consensus All-America honors following his junior season at Clemson in 2010 in which he posted 67 tackles, 26 tackles for loss and led the nation with 15.5 sacks. He earned the Bronko Nagurski Trophy as college football's top defensive player, the Ted Hendricks Award as the nation's top defensive end and the ACC's

Defensive Player of the Year award.

Bowers was selected in the second round of the 2011 NFL Draft by Tampa Bay and went on to play five seasons for the Buccaneers. Multiple injuries slowed his career, but he played in 53 games and made 10 starts for the Bucs, recording 69 tackles, 7.0 sacks and two fumble recoveries on his NFL career.

He played the 2017 season with the Edmonton Eskimos of the Canadian Football League, playing in 14 games and posting 17 tackles, 7.0 sacks and an interception.

A native of Bamberg, S.C., Bowers played defensive end at Clemson from 2008-10. He helped lead the Tigers to three bowl games during his three years on the field before declaring for the NFL Draft following his junior season. He earned his bachelor's degree in parks, recreation and tourism management in the fall of 2019 from Clemson.

Bowers attended Bamberg-Ehrhardt High School where he was a three-sport athlete and played defensive end and running back for the Red Raiders. As a senior in 2008, he led the team to an 11–2 record by recording 97 tackles, 33 tackles for loss and 14 sacks on defense while running for 1,219 yards and 19 touchdowns, catching two touchdown passes on offense and averaging 40 yards per kickoff return and blocking seven kicks on special teams.

He was ranked the No. 1 overall prospect by ESPN.com in 2008, and became the first Clemson recruit in

history to be ranked as the No. 1 prospect in the nation by any recruiting service. Rivals.com dubbed

Bowers the top defensive end prospect of the high school classes of 2005–2009.

The USF football program first took the field in 1997 and is in its 23rd season (20th at the FBS level) in 2019. The Bulls have posted 15 winning seasons, earned 14 All-America selections and 29 first-team all-conference selections and has seen 30 players selected in the NFL Draft. USF has made 10 bowl games appearances (going 6-4 in those games) and posted a program record six straight appearances from 2005-2010. The Bulls most recently made four straight bowl appearances from 2015-18 and posted back-to-back 10-win seasons in 2016 and 2017, logging a program-record 11-2 mark in 2016 while finishing both seasons ranked in the Top 25. USF spent a program record 20 straight weeks ranked in the Top 25 during the 2016 and 2017 seasons and reached as high as No. 2 in the national rankings during the 2007 season.