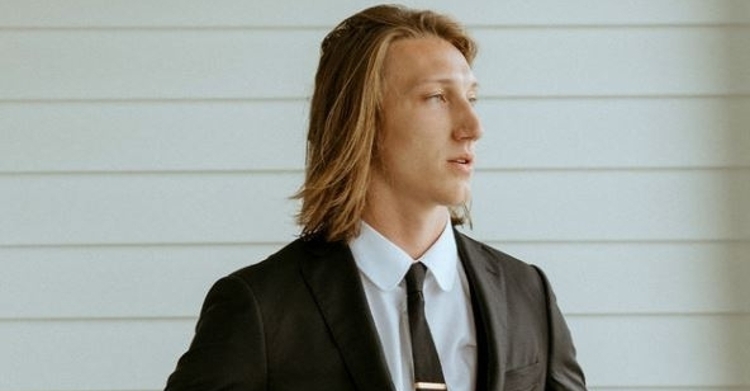 Lawrence to wear INDOCHINO for the 2021 NFL Draft

VANCOUVER, BC, April 29, 2021 -- INDOCHINO, the global leader in custom apparel, is dressing star quarterback Trevor Lawrence for the 2021 NFL Draft, taking place on April 29. As this year's consensus number one draft pick, Lawrence is set to stand out from the competition in more ways than one by wearing a custom suit he designed.

In addition to Draft Day, Lawrence wore INDOCHINO to his wedding earlier this month: "Every time I put on an INDOCHINO suit, something amazing happens. Draft Day is the biggest day of my career, so it's important to leave a lasting impression. What better way to do it than in a custom suit I designed myself?"

Lawrence visited INDOCHINO's showroom to get measured, choose his favorite fabrics and personalize a series of one-of-a-kind suits. For the draft, he will be wearing the Hartley Cotton Stretch Olive Suit with the monogram "2021 NFL Draft" embroidered in the blazer. He chose a lining printed with oranges (named Orange You Glad?) as a tribute to his alma mater Clemson University — where he holds the record for most career wins as a Tigers quarterback. This could also be a hint to Florida, which he may call home once the draft concludes.

For his wedding, Lawrence, along with his entire party of groomsmen, wore matching INDOCHINO Italian-milled Milano Black Suits. His monogram was inscribed with his name and wife-to-be "Marissa & Trevor," along with the date of their wedding, "April 10, 2021," underneath.

"We're thrilled to be helping Trevor look his best for the most important events of his life," said Drew Green, President and CEO of INDOCHINO. "Trevor has the potential to be the biggest NFL star of his generation, with many more memorable days ahead. We're incredibly excited to see what the future holds."