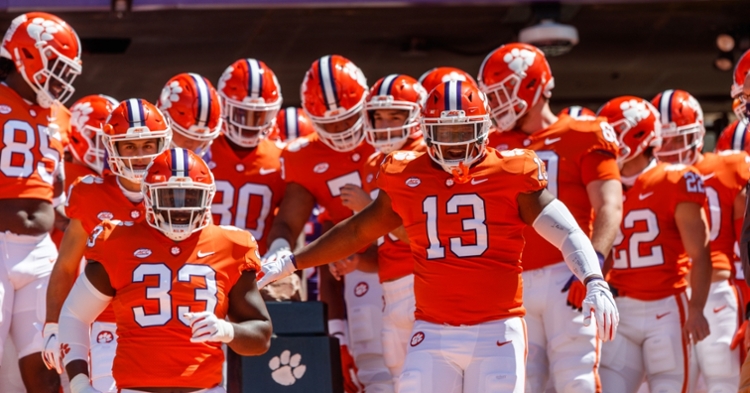 ESPN examined the best traditions surrounding college football Tuesday and Clemson's entrance rubbing Howard's Rock before a run down The Hill is among the best.

ESPN's college football Twitter account posted a top-5 list of traditions in the game that was led by Ohio State's band dotting the 'i,' followed by Howard's Rock, the Army-Navy cadet march, Ralphie the buffalo's run at Colorado and The Kinnick Wave at Iowa to a children's hospital just outside the stadium.

An ESPN piece this week on the top traditions and more in college football raved about the Clemson iconic entrance.

"I've been to Clemson only once, but what a game I saw: Clemson vs. Louisville in 2016. Deshaun Watson vs. Lamar Jackson," ESPN's Adam Rittenberg said. "The Tigers' run down the hill was absolutely electric -- my second favorite moment next to hugging Ryan McGee in the press box. But it's hard to top the anticipation of the team taking the buses around the stadium, assembling at Howard's Rock and then sprinting down the hill. Can't wait to be back in Death Valley."

Clemson Athletics describes the origin of the tradition on its website: "When the Clemson team gathers to Run Down The Hill, the players rub Howard’s Rock because of the mystical powers it is supposed to give Clemson players. The rock is mounted on a pedestal at the top of The Hill and was given to Coach Frank Howard by a friend (S.C. Jones ’19) who picked it up in Death Valley, CA. The Rock was first placed on the pedestal at the top of The Hill on Sept. 24, 1966, a game Clemson won 40-35 over Virginia. The team started rubbing the Rock for the first game of 1967, a 23-6 win over Wake Forest on Sept. 23, 1967."