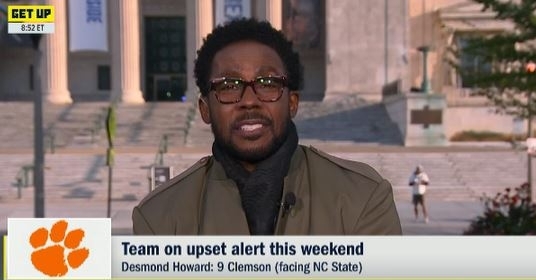 Howard is keeping an eye on Raleigh for a potential upset. (USA TODAY Sports-Mark Rebilas)

It's been a little while since the words "upset alert" and Clemson have been seriously put in the same sentence leading up to a game, but that's where we are with No. 9 Clemson's trip to NC State (2-1, 0-0 ACC) on Saturday (3:30 p.m. ET/ESPN).

The Tigers (2-1, 1-0) head to Carter-Finley Stadium as a 10-point favorite currently, coming off of narrowly escaping the ACC opener last weekend against Georgia Tech (14-8 win; entered as a 27.5-point favorite).

ESPN College GameDay analyst Desmond Howard will be keeping an eye to Raleigh on Saturday.

"Who's on upset alert? I actually look at Clemson," Howard said on ESPN's 'Get Up' Friday. "I think Clemson versus North Carolina State. I think that's going to be a really, really interesting game. Because you look at Clemson, and guys, they started the season against Georgia. And we're looking at Georgia's front-seven against Clemson's offensive line -- and they just dominated them. We think, well that's Georgia. They've got one of the best defenses in the country. But then, you look at Clemson against Georgia Tech, they look the same way like they looked against Georgia. You look, and this is a bigger issue than we anticipated going into the season. We knew Trevor Lawrence moved on and they've got DJ Uiagalelei and he's going to be a great quarterback. He hasn't played up to his standards. The standards set up by the quarterbacks before him.

Clemson hasn't lost to NC State since 2011, with only two of those games from 2012-on being within single-digits and the Tigers outscoring the Wolfpack 96-17 over the last two meetings.