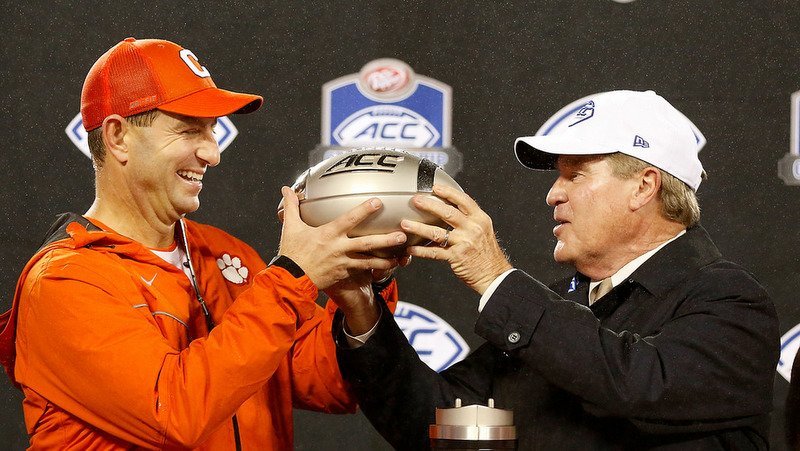 Swofford has concerns over the effect on recruiting and having agents involved.

There are a number of unknowns surrounding college athletics at the moment -- and thrown in that mix is the announcement Wednesday that the NCAA is moving forward with allowing compensation for athletes from third-party outlets.

ACC commissioner John Swofford said it's the right move, although there is plenty to iron out.

"I think it’s fundamentally the right move at this given point in time as we modernize college athletics," Swofford told The Drive with Josh Graham, "and try to put our student-athletes in a place where they can be successful across the board in their various endeavors. I do think it’s the right move. I also think -- right on top of that -- it’s a very complex issue in the parameters we’ll need to go around this. It’s going to be a challenge to manage it for our campuses and for college athletics as well.

"Obviously it creates situations of a negative nature from a recruiting standpoint and an agent involvement standpoint. It’s not a simple step forward. It’s a complex one but I think it’s the right move."

Swofford said his biggest concern comes with compliance and enforcing the rules on it.

"It’s significant change to the collegiate model in our country," he said. "Anytime you have a change of this significance and breadth -- it makes people a little nervous I think. That’s human nature. I’m confident the enterprise, so to speak, will find the right parameters and will be able to manage it. But there’s certainly some risk in that side of it.

"As I said, I do think it’s the right thing to be doing in this point in time in college athletics to benefit college students."

The NCAA board recommendations will likely go through adjustments before being officially passed in January and put in place for the 2021-22 season.

Among the provisions would be athletes being able to host skills camps and benefit monetarily, as well as earn endorsements and get paid for public appearances. Athletes would have to disclose their relationship to any business partner and would be given the ability to hire an agent for the purpose of securing deals.

The NCAA would then set up a board that will assess fair market value for deals to try to prevent impropriety.