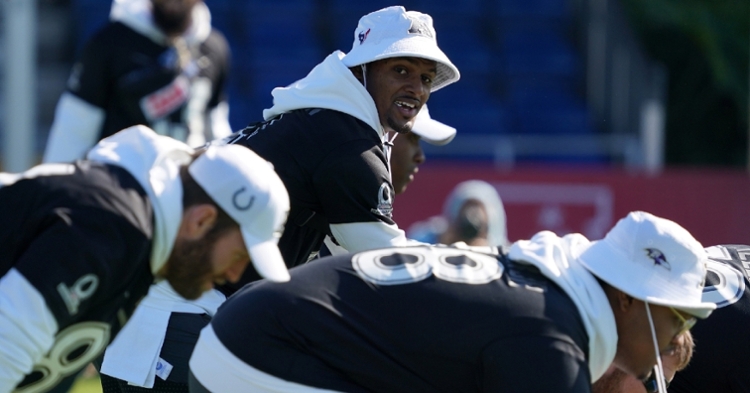 The Carolina Panthers are apparently interested in Watson, but just when he can play again is up in the air. (USA TODAY Sports-Kirby Lee)

Another day, another development on the Deshaun Watson front in 2021.

Watson's tumultuous offseason started with reports of his demand for a trade from the Houston Texans, then multiple serious allegations of sexual assault and impropriety over lawsuits and criminal complaints, and now more indications his time with the Texans may be short.

Watson, who reportedly had his foot and ankle looked at on Monday by trainers, missed a second-straight training camp session on Wednesday.

The All-Pro quarterback opened camp taking reps as a fourth-string quarterback and also lining up as a defensive back for the scout team.

Watson would have been subject to fines if he hadn't showed for camp, despite his trade wishes.

Texans offensive coordinator Tim Kelly did weigh in on Watson as a teammate Wednesday, calling him "a great asset" to the quarterback group so far.

The Texans are reportedly listening to trade offers after more firm stances on the matter earlier this offseason, with the Carolina Panthers among the reported suitors.

Any trade interest is subject to Watson's pending lawsuits and criminal complaints, which still leave the date of his return to the field in question.

From Inside Training Camp Live: #Texans QB Deshaun Watson is not at practice again. pic.twitter.com/w3Zg9cNImA