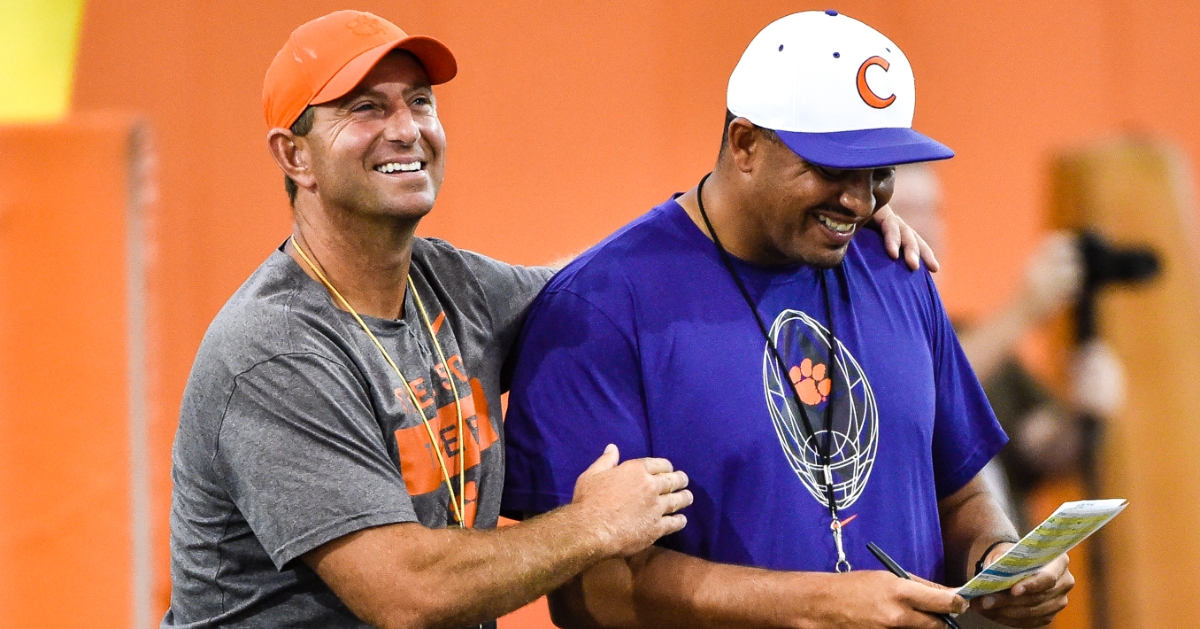 Dabo Swinney thinks they could still have some flexibility within divisions, bringing more games with former assistant Tony Elliott at Virginia.

The hot topic of the ACC spring meetings this week has been a proposed switch to a division-less football structure.

Former Clemson and current Miami athletic director Dan Radakovich told reporters on hand that they're "much nearer to the end than the beginning" on said talks, where the change is expected as soon as 2023.

The leader in the clubhouse for a new structure is reportedly where each team will have three permanent conference foes and rotate in two five-team sets of the remaining ACC teams home-and-way within a four-year span.

Clemson coach Dabo Swinney was asked about the proposed changes while in town for the meetings.

"It doesn’t really matter to me honestly. I’m not passionate one way or another. If we change to (no divisions), I can get on board with the 3-5-5 – not that it matters," Swinney told the ACC Network's Packer and Durham show on Wednesday. "Of the changes I’ve heard, that’s the one that makes the most sense. I personally like divisions. That’s my personal preference for various reasons, but I’m not passionate about it one or another. I want to do what’s best for the league.

"There’s a lot more people smarter than me running this league. They think that’s what’s best for this league - hey, I’m all for it. I could go either way."

The current structure has been criticized for the lengthy gaps in meetings across the divisions. For example, Clemson has traveled once to Duke (2012), Virginia (2013) and Miami (2015) since 2010 and made a first trip to Pittsburgh last year after the school joined the ACC in 2013.

Swinney said the ACC is just one of several leagues in a position of figuring out what's best from a scheduling standpoint.

“It’s the same issue in all these conferences. Some conferences are getting even bigger and it’s becoming even more of a problem," Swinney said. "So everybody is dealing with the same conversations – what’s the best way to address it? I think you can address it with the divisions as well with maybe a change in the cross-rival stuff and you have some issues there in how to protect it. We’ve had some discussions there.

"Again, at the end of the day – what’s best for the league moving forward? I think all of us would like our kids have a quicker cycle through and being able to play everyone. It’s good for the fans, et cetera. Still a lot of conversation to go on that."

The next big step is discussing the possibility with TV partners. Still some talk, too, about 2 permanent opponents and 6 rotating but, as Miami AD Dan Radakovich said today about scheduling chatter: "We're much nearer to the end than the beginning."