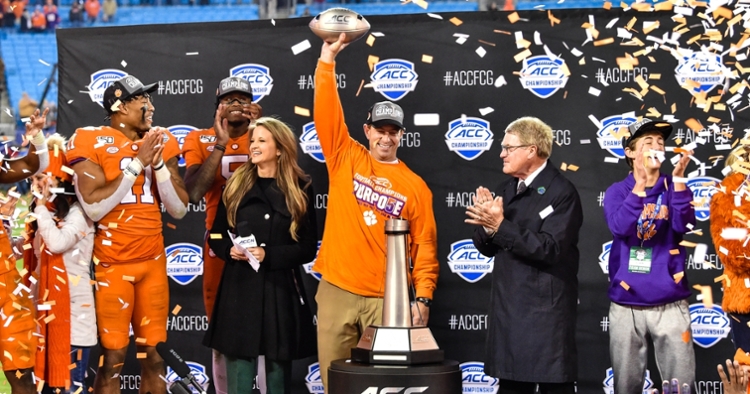 Swinney is noted as a "wonder ambassador for Clemson University."

In 2014, the Rutland Institute for Ethics Advisory Board elected to name the Institute’s highest honor after James F. Barker, the 14th president of Clemson University, in recognition of the ways he exemplified integrity, thereby bringing ethics into focus in the best possible way: by living it. Today, the award recognizes individuals who have made an impact in ethical leadership and/or ethical decision-making. It is an opportunity to celebrate someone who embodies what we want our Clemson student body to emulate. The award is given annually, and is one of the largest programs operated by the Rutland Institute for Ethics. Barker himself received the inaugural Ethics in Action Award in 2014. In 2015, Greenville nonprofit executive and founder of The Family Effect, Scott T. Dishman, received the distinction. Minor Mickel Shaw, philanthropist and community leader was the recipient in 2016, and former Charleston mayor Joseph P. Riley Jr. was presented the fourth annual James F. Barker Ethics in Action Award on February 10, 2018. Tobin Cassells III, CEO of Southeastern Freight Lines Inc. was the 2019 recipient.

Dr. William McCoy, director of the Rutland Institute for Ethics, was especially proud of the Advisory Board’s choice. As stated by McCoy, “Having come from Northern Illinois University to Clemson in 2018, I was aware of Coach Swinney’s reputation; but I was blown away with just how accurate his reputation was and continues to be.” Swinney has led the Tigers to a place of monumental athletic success during his tenure at Clemson University, and he is poised to strengthen his winning record with the constant inclusion of exceptional team talent. Although Swinney contributes his success to his strong and unwavering spiritual beliefs, the bedrock of his demonstrable success is illustrated in his “walk the talk” attitude, which can be observed on and off the field. As stated by McCoy, “We are proud to give this award to someone who does his best to live his values unapologetically, and who so freely gives more of himself than what is required.”

Clemson Athletic Director, Dan Radakovich agrees, "It's been a privilege over the past seven years to see first-hand how Dabo embodies the core tenants of the James F. Barker Ethics in Action Award. One of the first words that comes to mind about Dabo is 'integrity.' I see it in the way that he is with his family, and the way that he runs our football program.

"Dabo is a wonderful ambassador for Clemson University, and the emphasis he places on doing things 'the right way' is contagious. There's no question that he exemplifies all of the ideals of a leader, and that bears itself out in the young men that leave his program. The identity of the football program is marked by its commitment to ethical conduct, leadership and integrity."

The dinner celebration will be held at The Madren Conference Center on March 23, located at 230 Madren Center Drive in Clemson.