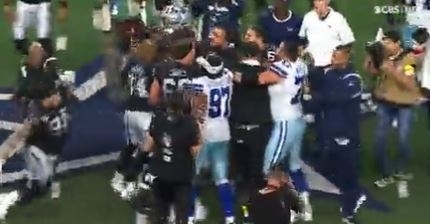 Simpson was selected by the Raiders in the fourth round of the NFL draft last year.

The Raiders won the game in overtime and Hill is shown catching Simpson off-guard with the punch while Simpson had his helmet on. Simpson was then restrained by teammates as Hill retreated away.

"After the Las Vegas Raiders-Dallas Cowboys game on November 25, you engaged in conduct that this office considers unnecessary roughness and displays a lack of sportsmanship. Specifically, as both teams were shaking hands, you waited more than 50 seconds for your opponent at the 50-yard line. When you located him, you then walked toward him in the opposite direction of your locker room. You both engaged in a verbal chest-to-chest confrontation which you escalated by throwing an open hand punch to his facemask, forcible enough to cause your opponent's helmet to come off," the NFL suspension letter to Hill said.

Watch the incident below: